Suicide of a Superpower: Will America Survive to 2025? By. Patrick Buchanan

This book was not what I expected.  Although I find myself agreeing with him on points such as how the US' population is shifting from Anglo-Saxon to other "minorities" such as Blacks and Hispanics, the book is not clear on what we do if in fact this is a problem.  Aside from eugenics of the African-American, Hispanic, Korean and other communities and the promotion of childbearing in the Anglo communities I see nothing that CAN be done nor do think SHOULD be done.

I agree with Buchanan that "Affirmative Action" is offensive to those who benefit from it.  If the requirements for the Naval Academy is a 4.0 GPA average, I find it insulting that Hispanics, African-Americans etc are only required to have a 3.5 GPA.  Why is this?  Am I not capable of getting a 4.0 that I need special help?  It perpetuates the myth that non-Anglo-Saxons are less intelligent.  Additionally, it discriminates the Anglo that indeed has gotten the required 4.0 GPA that will not be picked because someone less prepared (GPA wise) is going to take their spot.  Ironically, when writing this review, my son from Middle School showed me HIS report card and he received a 4.0 for the year.  I know how hard he worked.  Could I tell him that even though he met the requirements and worked real hard, it was still not good enough because he is 2nd generation American but has a Hispanic last name and the diversity police require an African-American or Korean, or %enter your race/color/creed/sexual orientation%?  I cannot. 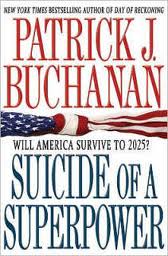 Mr. Buchanan is obviously against free trade.  I disagree with him, however I believe that the problems that exist today and the reason we continue to experience them is not that China is less expensive to manufacture, albeit true; the issues are that the US' economy has been so bloated and distorted that today a salary in the US due to Unions and inflationary steps taken by the "Fed" require companies to be beholden to the unions.  Not that the unions are solely to blame, but they are a big peace of it.  I do not believe that closing off trade with the world will do the trick.

Mr. Buchanan comes off extremely racist.  I know that many liberals will say "of course, he is Republican".   Although only part of that is true, he DOES have and interesting chapter regarding the Democratic Party and their roots.  Not so squeaky clean as they portray themselves to be.

I did find some interesting subject matter to do further research, however I do not necessarily recommend this book.

Really enjoyed the book.  The book covers many of the distant and not so distant "conservatives" of American history.  This book is not an exhaustive biography of these individuals but does serve to whet your appetite to further research these interesting individuals.  Obviously the term "conservative" will not pass the smell test for the Hannity / O'Reilly enthusiasts, but it does remain true to its original meaning.  The interesting thing about some or most of the individuals is that the "left" thought they were right-wingers and the "right" thought they were liberals (what ever the terms for the present day understanding for the respective times).  Some of the individuals covered in the book would not have made it on my radar for "must reads".  I will try to find some good books on Calhoun, John Taylor of Caroline, Cleveland, Sam Irvin, and H.L. Menken. 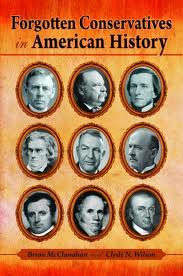 I must admit, I am not too familiar with the co-author Clyde Wilson, but have subsequently researched a bit and have heard Mr. McClanahan tell the story of how they met and eventually collaborated.

Mr. McClanahan is a great author.  I read his previous book "Founding Father's Guide to the Constitution" and it was equally informative and much more.  I am also a member of LibertClassroom dot com where he has lectures as well.

I recommend this book to any liberty warrior that is interested in the real heroes of liberty throughout our history.

No They Can't By: John Stossel

In the spirit of disclosure, I align to a higher degree with the Libertarian party.
John Stossel, a Libertarian, is, as always, right on mark.  His sensible way of looking at issues make it painfully obvious that the two party dictatorship attempts to purposely confuse things and provide straw-man arguments. 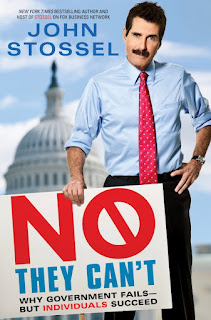 Stossel tackles all the "hot topics" in a sensible, intelligent, logical and concise manner.   Stossel covers everything from the "WAR" on drugs to health care.  Stossel addresses the economic issues today with his "Laissez-faire" view.  I love his cool, demeanour and the way he explains things in a very simple understandable and most importantly, non emotional manner.  Anyone who knows me knows that I always say, "If you remove emotion from the argument, you are left with nothing but facts".

The chapter on education was incredibly informative.  He explains how "Intuition" would lead you to believe things in a certain way, but then he gives you the "reality" view of the problem.

Posted by Manny Fernandez at 5:56 PM No comments:

No Higher Honor By: Condoleezza Rice

FINALLY.  This book was long and hard to get through.

Condoleezza Rice is an interesting person.  She is a very religious, intelligent, and dare I say it...., articulate women.  This book is her memoirs of her tenure in the White House with both Bush administrations.  This book is not a short book.  It is over 700 pages and covers the many challenges this country, the administrations and herself faced during her time as National Security Adviser and eventually Secretary of State. 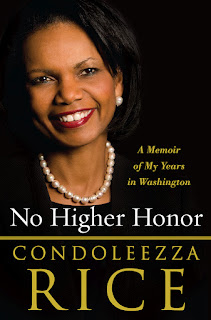 She is critical of herself, not missing an opportunity to admit where she mis-spoke, mis-stepped and plain old screwed up.  However she was not as critical on George W. Bush, when I think he deserved it.  This books covers from the contested election, to 911, to Afghanistan and Iraq to Katrina and everything in between. Rice is a master of the idiom, peppering this book with enough idioms to fill a separate book.

As America’s chief diplomat, Rice traveled almost continuously around the world, seeking common ground among sometimes bitter enemies, forging agreement on divisive issues, and compiling a remarkable record of achievement. Although I do not agree with her on many issues, I believe she acted honestly based on her beliefs as to what was right and wrong.
No Higher Honor takes the reader into secret negotiating rooms where the fates of Israel, the Palestinian Authority, and Lebanon often hung in the balance, and it draws back the curtain on how frighteningly close all-out war loomed in clashes involving Pakistan-India and Russia-Georgia, and in East Africa.

I think the most disturbing part of this book is that you walk away dumbfounded and the level of intervention the US practices.  Some of the foreign countries committing atrocities just so the US could step in and pay them off.  I believe 'blow back' is real and is caused by the aforementioned.  Its time we walk away.


Posted by Manny Fernandez at 11:20 PM No comments:

Throw Them All Out By: Peter Schweizer

If I had only one word to describe this book, it would have to be "shocking".  It is no wonder why people are dying to get in the race.  The level of corruption taking place in Washington D.C. is absolutely shocking.  If just a fraction of this book is factual, it is a painfully obvious why the Legislative branch has dismal support. 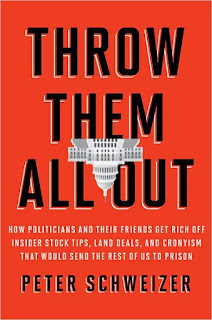 Schweizer  touches on the many ways (scams) the Political Class game the system to their advantage.  Politicians like Harry Reid, Nancy Peloci and Dennis Hastert have all used federal earmarks to enhance the value of their commercial properties.  Is there instances when some of the politicians invest in companies as any other private citizen and enjoys a windfall gain?  Sure, but just the examples in this book make the odds against someone picking the winners a few days before major legislation is passed or sold the day before some negative bill or regulation was passed defies all sanity.

Schweizer, the author of another book of the same genre, "Do As I Say Not As I Do" pulls no punches and does not dwell on partisan bull.  It is painfully obvious in this book that the problems that exists today are ironically "bipartisan".  This Political Class protect each other and give the illusion that there is partisan bickering taking place.  Both sides benefit from the insider trading.

Once again, the Political Ruling Class have shown that they are out of touch with the real world.  Reminds me of the following:

If this spirit is ever corrupted to the point that it will tolerate a law which does not apply to both the legislature and the people, then the people will be prepared to tolerate anything but liberty. —James Madison, Federalist No. 57

Some notable quotes from the book:

Companies recognize the importance of having friends in powerful places, and granting them access to an IPO is one way to reward them. Members of Congress often participate in IPOs that are difficult, if not close to impossible, for ordinary Americans to join. Pelosi and her husband have been involved in no less than ten lucrative IPOs during her congressional career.  Pg 58

September 23 that he became a highly visible player in the drama, when he invested $5 billion in the investment house of Goldman Sachs, which was over-leveraged and short of cash.


Great book.  Not long but very informative.  I recommend it.

Posted by Manny Fernandez at 11:03 PM No comments: