Elon Musk: Tesla, SpaceX, and the Quest for a Fantastic Future By Ashlee Vance

Elon Musk: Tesla, SpaceX, and the Quest for a Fantastic Future 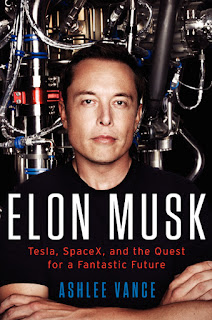 Mr. Musk is an incredible personage. One part Steve Jobs, one part Tony Stark the man is something truly incredible.  What this man has accomplished from a green perspective is truly phenomenal.  He has been able to capture the attention of Capitalists around the world that have always turned away from a heavily government subsidized industry. Even me that have pushed back for the same reasons stated above, have considered purchasing a Tesla Model S.  Although a bit pricy, I want to do the calculations to see if it is a wash when adding the savings of gas.
Musk, along with his SpaceX team have accomplished amazing things regarding space flight.  The company's resolve to make there own parts after having more traditional aerospace companies fail to deliver at the speed and quality Musk demands is amazing.  It's funny how back in the Rockefeller days, people accused him of monopoly because he bought companies that made and produced the products he used to develop oil. Today Musk is ordained as a genius in business; man how times have changed. Even if Musk stops everything he is doing today, he will have already left his mark on the world.
This book covers the life of Musk's family as well as Musk and his brother, his challenges, dreams and the attainment of those dreams. This book is a great read and extremely motivational.  I gave it to my 10 years old which enjoys Quantum Mechanics.  I am sure this book will inspire him to follow his dreams.

Posted by Manny Fernandez at 6:33 PM No comments: 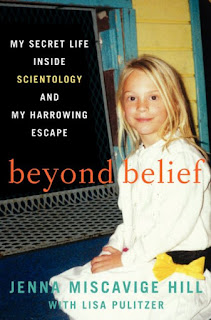 I tend to read multiple books on similar subjects back to back. I followed Leah Remini's, Trouble Maker with this one. Although Leah's book focused more from a perspective primarily of her adult life and tribulations as a Scientologist, Hill's book takes you through the perspective of someone born into Scientology and the interworking of the "Sea Organization".
The book covers her time "at the ranch" where children were used for hard labor and were indoctrinated to put the church above all. At the gentle age of 7, Micavige-Hill signed a Billion Year Contract which is standard operating procedure for the religion.  Not knowing the depth of such a decision, the ridiculousness of scale and more importantly, the lack of legality of the contract signed by a minor, she felt obligated to live true to it.
Soon enough, the indoctrination is clearly visible in the book. They remove the parents from her life and the church becomes the ward. Hard labor ensues and ratting on your peers becomes becomes the norm. The church controls every aspect of your life including your relationships with the opposite sex.  It was disturbing to read the turmoil in her life as she grew up. The church robbed her of her innocence and her childhood.
Being the niece of David Miscavige did indeed help her in many ways, although she seemed to not realize it until later in her life, but it would turn out to be a double edged sword. She was expected to act a certain way.  The Miscavige name was to be guarded and protected at all costs.  Jenna seems to have inherited the same fire as her uncle, although she used it to get out.
Jenna's first love was destroyed by the church and when she was finally over him and met Dallas, she was determined to not allow the church to intervene in this relationship.  Her parents, obviously Miscaviges themselves left the Seaorg but were allowed to keep communications with Jenna, probably because of the relation to David and to keep them from stirring  the pot. Her parents had the foresight to give Jenna a credit card which eventually would save her and Dallas.

Jenna finally made the break from the church while Dallas was still on the fence, Jenna made him see the light and they both "blew" (term used in Scientology for someone escaping the church; yes you read that correctly "ESCAPE") from the church.  The credit card given to Jenna was used to get to safety once they were out of the clutches of the church.
Today she has two kids and has left the Church of Scientology.  Although Dallas remains open to believing in something, Jenna has chosen to believe in the now and making this life worth while. She is a brave woman. Throughout her ordeal you saw her buck the system even when she knew the stakes were high.
I wish her and her family continuous happiness; it is well deserved.


Posted by Manny Fernandez at 10:39 PM No comments:

The Science of Success By: Charles Koch

This was a great book about not only team building but of the notion of Market-Based Management and how it has helped Koch Industries to become one of the largest and most successful privately owned companies in the US.

The Kock brothers have become synonymous with greed and Republican electioneering.  The irony of that is that the Koch Brothers actually support most of the causes that are purported to be near-and-dear to the hearts of the left.  Issues such as Gay Marriage, legalization of drugs & they are anti-war to name a few.  It goes to show you the blind fury of ideology and hyper-partisanism. 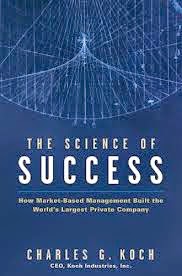 This book covers the management style of Koch Industries and they way they operate their business(s).
Posted by Manny Fernandez at 11:21 AM No comments: 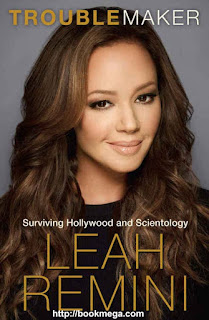 Remini is the consummate comedian throughout the book.  Even things you know were tragic in her life, she adds a self-depricating spin to them that undoubtedly makes you laugh.

The book covers her life's quest both in Scientology as well as Hollywood in general.  Remini provides a good, behind the scenes look at the ins and outs of the Hollywood sitcom world and what was necessary to get "in".  She accounts her struggles in trying to land a role in a good sitcom that would allow her to provide for her family culminating with the successful time with King of Queens for nine seasons.   She also discusses the commitment to Scientology and the burden that it placed on her life from a time, money, relationships and emotional perspective.

Remini is very down to earth and shows a great deal of concern for her family.  She essentially is the matriarch of her family when it comes to financial concerns.  At an early age, she makes sacrifices for the betterment of her mother and sisters.  She discusses the abuses of her father and how he treated her and her sister.  Although he is portrayed as a non-supportive, disconnected father, the man was spot-on when he warned her about the religion.

Remini accounts her youth in New York as she and her sister lived an exploratory life in the big city and traveled to a from it to follow her mom's footsteps in Scientology.  She eventually joins the "Sea Org" for a short-lived tenure there.  She tells the story of being 'overboarded', in which a partitioner will be taken out far from shore on a boat and thrown into the water until such time as they agree to whatever it is the one initiating the 'overboard' process wants.  She tells the story how she did not reverse herself and did not give in.  Unable to utter the words the offender wanted her to say.  Save the Scientology spin, I really connected with her youth since we are only a year apart in age and many of the things she talked about form parallels in my life.  She talks about her promiscuity and even later in life, her infidelities.

She later recounts the infamous "wedding" events where she, her husband Angelo, Jenifer Lopez and Marc Anthony accompanied A-Lister Tom Cruz and Katie Holme's wedding in an Italian Castle.  She tells a story of the church trying to separate Lopez and Anthony from her and her husband the entire time.  Leah was subsequently reported and fined, and although later exonerated, the church took years (6) to credit her the money she had initially paid as penance for her actions.  In Scientology, if you request refunds from the church, you are automatically labeled an 'SP', Suppressive Person which by Church bylaws is no longer entitled to a "refund".  So essentially, if you want your money back, you become an SP which disqualifies you for getting refunds.  Furthermore, it was extremely interesting to get a behind the scenes account of Tom Cruise and what he is truly like.  Because of my professional career, I have met and interacted with many famous people.  The one thing I have gotten from it is somewhat cynical sense of thinking about these people.  Most of the time, they are not the nice people they portray on TV shows and movies.  Many of them are ingrates, self absorbed, narcissistic and have little concern about the "little people".   This is why I do not normally put any stock in what these people spew about politics, economics and other subject that quite frankly they don't REALLY care about.

I was shocked, quite honestly by the overt hatred for homosexuality, more so than the supposedly hatred felt by Christians.  We hear these Holywooders [sic] speaking out against a particular political party for being associated with a religion that does not support LGBTQ yet do not turn their guns on Tom Cruise and the members of Scientology or even those of some other religions that have no rights for women or homosexuals.  It is very much a selective outrage scenario.

Leah discusses her concerns of Shelly Miscavage; David Miscavage's wife which has been missing since 2007.  She has gone out of her way to help find her.

This is a short book but packed with great information.  I truly commend Leah Remini and her strength to openly oppose a religion, group, corporation and/or cult that has a history crushing anyone that opposes them.  I am a firm believer of the freedom to practice your religion of choice, however with that said, I believe even greater that right of people to choose.  I do not believe that a religion has a right to kill someone because they have deemed so or choose to treat certain people differently because of their sex, orientation, race etc.  I would love to see our authorities investigate allegations of malfeasance  as reported by partitioners or former partitioners.  From all that I have read, this particular groups saddles its followers with HUGE financial strains and engages in unethical business practices, not to mention that if a fraction of the allegations are true about the practices of holding people against their will, physical abuse, mental abuse or emotional abuse are true, there should be criminal charges brought to those responsible for them.  Additionally, any religion that tells you to disconnect from your family because those people are "SP" or enemies of the church, should be avoided at all costs.