Taken for Granted: How Conservatism Can Win Back the Americans That Liberalism Failed By: Gianno Caldwell

A refreshing view of the Conservative movement through the eyes of an African-American young Republican. Caldwell comes from the inner-city in Chicago, Il. His mother dealt with drug addiction and he was raised by his grandmother. He comes with a level of street cred you don't get from other authors. 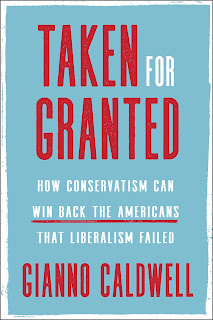 Although I do not agree with 100% of what he writes, I do consider it and can agree to disagree. Regarding Charlottesville, I cannot in good faith, broadly paint all protesters as racists or anti-racist gods. I do believe that I can protest the taking down of a Civil War statue and not be a White Supremacist. As a matter of fact, I do not agree with White Washing history. But make no mistake, if KKK and Real White Supremacists has their way, me, the black person and the Jew would all be hanging from the same tree. I never get how that can be. Candice Owens, a Black Woman is called a racist because she supports Trump. I have a friend of mine that is married to a beautiful dark skin, black woman. He is white. He is also a Trump supporter. I am shocked to see how quick they call him a racist. It's preposterous.

Regarding Kaepernick, I say he has the right to take a knee if he wants. I support his right to do it, however I am disrespected by it because I served in the military. Maybe if he was a vet I would see it differently, although I doubt it. I choose not to watch or attend the NFL games. I also have taken my own stance against Nike. I will not spend a single cent on anything Nike. They have decided to take a politics stance. Ironically, the left rail about "Citizens United" yet is fine with Nike taking a stance politically as long as it's advancing their agenda. Chick-Fil-A did not get afforded the same level of free thought and 1st amendment.

I found the book refreshing and very apropos. I recommend this book to anyone with an open mind willing to listen to someone outside of your echo chamber. Caldwell calls out Democrats, Republicans, Whites and Blacks. Caldwell is a smart, tenacious and driven individual. He definitely motivated me. 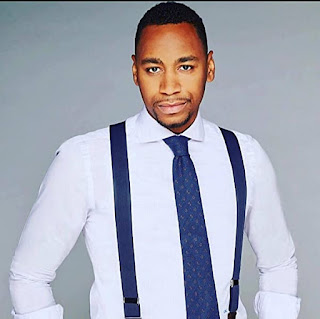 Fortitude: American Resilience in the Era of Outrage By: Dan Crenshaw

What a great book.  One would think this is a completely partisan book, those assuming that would be wrong.  What it actually is, is a book with a perfect title "Fortitude".  I have both my sons reading this book.   I am not saying I want them to become seals, although that was my plan (believe it or not), but I do want them to embrace their dreams and aspirations in the same fervor Crenshaw writes about. 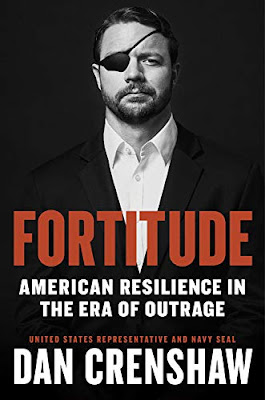 This man's journey is an amazing one.  If you were to just take into account becoming a Navy Seal, which by itself is an amazing feat, he would be impressive.  He was blown up, lost an eye and almost lost the other, went back to the teams, graduated from Harvard and became a Congressman.  Any single one is extremely impressive.

It is a book you should really consider reading.  It is not an overly political book as I mentioned before.  You do have politics since he IS a Congressman.


Posted by Manny Fernandez at 12:29 AM No comments:

Revolution: Trump, Washington and "We the People" By: KT McFarland

This is a great book; probably the best political book I have read in the last couple of years.  McFarland describes her time at the White House with President Donald Trump.  She is neither a cheerleader or TDS (Trump Derangement Syndrome) SJW.  She explains how Trump operates, his thinking and his approach. 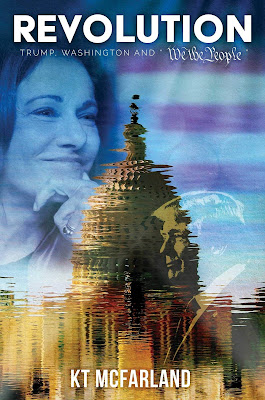 With her past experience with other White House Administrations, McFarland has unique view and can be a good judge of how this Administration is doing.  I enjoyed her perspective on how the White House had bed set up for the anticipated Hillary Clinton.  Equally interesting is the approach Trump has in meetings.  He does not allow others to dictate the agenda nor control the narrative in meetings.  I have always found that to be disheartening when the people elect a POTUS, and you have a bunch of puppeteers pulling the strings behind the scenes.

McFarland describes his decision making process and how he wants to be the one to make the decisions not one of his handlers.  I find that refreshing.  Love him or hate him, apparently those are the only positions allowed today, Trump is an amazing businessman and has brought the knowhow of the board room into the situation room and from what we can see, absent the Coronavirus, he has done amazing things for the economy, for jobs, and in spite of all the accusations, has done more for Hispanics and African-Americans (Even though I hate using hyphens) than any other POTUS in the last hundred years.

McFarland discusses that absolute war the media has towards Trump.  Again, wether you love, hate or love to hate him, you have to see that the media is 1000% (yes I know it says 1,000 and that 1,000% is impossible) is an arm of the Democratic Party and that they will NEVER give Trump an "L" regardless of what he does or does not do.  Just yesterday I was reading how Deblagio is installing fences on NY Beaches to keep people out, yet when Trump mentioned the wall, the Left lost their heads saying, "walls, fences or barriers or racist".  We see it with Joe Biden and his son, Joe Biden and rape allegations, Biden and the Quid Pro Quo with Ukraine.  We see it with Secretary Clinton and her crimes, and YES they are 100% crimes.  As any of us reading this review would be under the jail for less that what she has gotten away with.  Despite the constant investigations, impeachments, rhetoric, fear mongering, et al, the POTUS has STILL done some amazing things for this country that previous Administrations had told us, and we believed that would never get better; "The new normal".  I wonder, how much better would this country be if only the media were "fair" (ironically they throw that word around a lot) and the House were not in a constant "impeach" witch hunt.  You can still hate Trump.  I hate Obama as a President, but like him from a personal basis, even though I of course do not know him.  But I can separate the two.

McFarland also discusses the MO of our top LEA and how they royalty screw people.  Even powerful people; people connected must beware.  She discussed the FBI investigation and the Mueller investigation she was thrown into.  She wrote these chapters before the information recently revealed about how the FBI and other Intelligence Agencies use their power to attack and take out their perceived foes. She wrote about Flynn, which again, if you turn a blind eye to the tactics the left has used against the Republicans, then you need to be accepting when it turns on you.  Live by the sword, die by the sword.

Finally, she is rightfully critical on China and their plans to overtake the US regarding super power and Worldwide influence. Sadly, we can see how the WHO was either negligent at best, complicit at worse in allowing the Coronavirus to take hold worldwide in the greatest "pandemic" this planet has seen.  Yes China gets a pass.  No one wants to say anything negative about them.  Even the NBA and other US companies are terrified as is Hollywood to criticize China.  If the aforementioned were as open to criticize China as they are to criticize Trump, China would be less bold to do what they do. 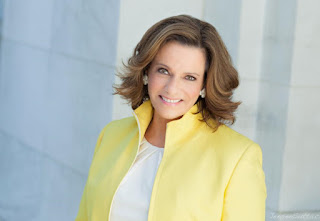 I recommend this book for anyone looking to understand the POTUS.  She has a unique perspective since she has served in multiple administrations.

Posted by Manny Fernandez at 10:05 AM No comments:

The third and final book of the John Matherson series by Willam Forstchen.  I enjoyed this series.  I normally don't do series, but in this case, the dystopian theme called my attention.  This book takes place after the demise of the overzealous Dale Fredericks.  John gets word from an old friend, Bob  and so begins the whirlwind of ups and down Forstchen is known for.  Just when you think you have the plot rolled up in a neat little package, the story shifts and all that was up, was now down. 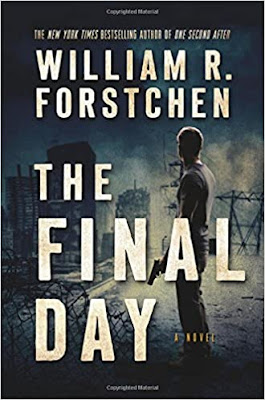 In this book, Matherson and Makala are expecting a child although she was not as prevalent in this book as the other two.  John is on the run from the new government in Bluemont.  John is put in situations where he needs to make choices that will affect his wife & unborn child, daughter, and fellow towns people.  Obviously, you will want to read "One Minute After" and "One Year After" first or you would be lost.

**SPOILER**
The irony is that some of the government folks moved their families prior to the EMP.  Fast forward to today when we had members of congress that divested themselves of their stock portfolio prior to the pandemic crash, makes you think this book series was used as a manual and not a novel.  Matherson thwarts an attempt to attack our country and ensures that a new government be properly constituted.

I think this would make a great TV series.  There is a lot of in-between content that could spread to multi-seasons.