Destiny of the Republic By Candice Millard

Another excellent book by Ms Millard.

This book covers the life, election and ultimate assassination of President James A. Garfield.  This book has enough details to keep you interested while not overwhelming you with useless facts or information.  The book is well researched and is an easy read, as opposed to some other biographies of presidents. 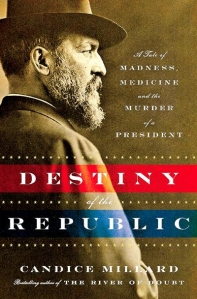 The interesting part of this book is the off stories.  For instance, the book goes into how Alexander Grahm-Bell invented a device that would come to be used later in life to track bullets in the human body.  Mr. Bell's life is touched on with enough details that it has interested me in pursuing additional works on Bell as the subject.  It also discussed the first air conditioning system created specifically for Mr. Garfield which revolutionized the world.

This book goes through his early life, his unlikely, unplanned and unwanted nomination and ultimate election to the presidency as well as his unfortunate and untimely assassination just 200 days after taking office.  It discusses his rivals as well as his allies.

All in all an excellent book.  Highly recommended.