It's Dangerous to be Right when the Government is wrong by: Andrew Napolitano

Another Amazing book from this era's Thomas Jefferson on steroids.  His wealth of knowledge on Constitutional matters is virtually unequaled today.  In this, his sixth book, The Judge tackles the many fallacies that are propagated to the public by media, schools, and other progressive talking heads.   Napolitano is, as always extremely neutral with regards to party.  He is an "equal opportunity basher".  He pulls no punches. 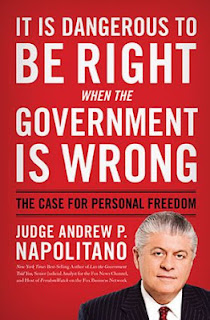 This book  was thoroughly researched and Judge Napolitano breaks things down for both the learned and layman.  Napolitano points out where the various "central" governments lost their ways and how it eventually ended up with the people losing their rights.

Some label Mr. Napolitano as a "Right-winger" and I even saw a comment on Amazon about him being a mouthpiece for Saudi royalty. He is a confessed libertarian that believes in personal rights and freedoms. regardless of your party.


"...now consider the passage of Obamacare. Your once private communications and medical decisions with your doctor will now be regulated and monitored by the government. The law requires the Department of Health and Human Services to issue forty thousand laptops, one to each primary care physician in the United States, and it requires the physicians to record for federal bureaucrats whatever you tell your physician and whatever your physician tells you."

It Is Dangerous to Be Right When the Government Is Wrong (Andrew P. Napolitano) Page 141

Just one of the nuggets from this book.  I absolutely love reading Napolitano.  I wish he would consider running for office.  The united stated needs someone like him, intelligent with fidelity to the Constitution.

Posted by Manny Fernandez at 8:51 PM