For a couple of years now, this book has been eating away at my mind.  I have put it off and have always made excuses why I was not reading it.  I finally broke down. I watched the movie first in this case so my approach to the book was a bit skewed and bias. 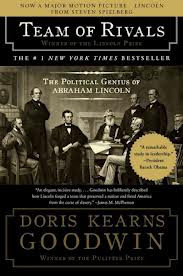 Published in 2006, this book has become the book by which all others are measured.  Goodwin does an excellent job in the book by covering Lincoln's "Rivals"; so much so, that my interest has been piqued to read of some of the other personages in this book, more especially Salmon P. Chase which appeared to embrace Natural Law.  I have read many other Lincoln books and this is on my top 10.  Not being a "Lincoln Lover", I do enjoy reading about the man and have vowed to dedicate one book a month to Lincoln.

As was expected, the overarching theme of the book is how great Lincoln was and anything that anyone can accuse him of on the negative side, is merely a misunderstanding or Lincoln taking the advise of some other poor soul that carried the blame.  Even Mary Lincoln who is often portrayed as a mentally unstable, over spender and economically inept, Goodwin shows a side of her that is compassionate and heart felt.  Yet Goodwin does not give the same in site into [Abraham] Lincoln's dichotomic administration.


Lincoln seems to have tried to convince himself and his cabinet that usurping the Constitution was reasonable and authorized.  However just because you believe in your heart-of-hearts or are able to convince those around you that what you are doing is not wrong, does not mean that it is right regardless of how many times you repeat it.


Although many people will argue, even though the facts are glaringly visible, that the war was fought to free slaves, it is even obvious in Goodwan's work that the war was not fought to free the slaves but to save the Union.  However what is conspicuously absent in this work, is how the North wanted to seize control from the South.  The South wanted nothing to do with the North. Additionally absent is the amount of the Federal "income" generated from the South.  It was a revenue stream issue.  There were more ports in the South and the North was asphyxiating the South with the tariffs.  It seems that people feel that if they disagree with Lincoln's actions, that somehow make them racist and pro-slavery; that is not the reality though.


One of the disturbing pieces of Lincoln's war is his reaction to Sherman's taking of Georgia.  It is known and understood by many that Sherman was a brutal killer.  He and his men, raped Southern women, killed innocent women and children and quite honestly, men that had nothing to do with the war save that they lived in the South.  Lincoln, being aware of the actions, lauded Sherman and his men instead of prosecuting them.  I think blocking the import of slaves which had already been done, and emancipating the slaves by purchasing them would have been both cheaper in blood and treasure and less brutal.

As far as the movie being based on the book, I would say that it is more based on a chapter than anything else.  Had this been a mini-series covering the book, it would have been even more amazing than the movie.  I loved the movie.  Aside from 13 year old son, that loves history maybe as much as I do, everyone we watched it with fell asleep.
Regardless, I enjoyed the book.  I believe it to be 'required reading' for anyone wanting to know about Lincoln and his administration. There are few books that overtly accuse Lincoln of his misdoings; this is not one of them.  Goodwin is a great author and aside from the typical "Lincolntonian" agenda, this is an amazing book. It was sad that Lincoln died the way he did.  Although I disagree with him on so many levels, he was a father and a husband and those around him suffered.