I love common sense thinking.  Unfortunately is is not so common these days.  Mr. Sowell breaks down the fallacies in economics as seem today.  He holds nothing back as is his style.

"Thomas Sowell is an American economist, social theorist, political philosopher, and author. He is currently the Rose and Milton Friedman Senior Fellow on Public Policy at the Hoover Institution, Stanford University" ~ Wikipedia 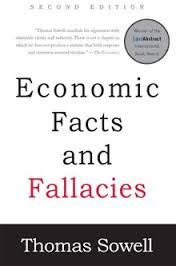 Thomas Sowell delivers a common sense view of the fallacies that are fed to the public on a constant basis.  Many will argue his views which is fine, however at a 10,000 foot view it is CLEAR that what the politicians are asking for has not worked heretofore since there is an insatiable need to provide more of it.  If it were so effective in delivering what it claimed to, the problems would be solved.

The book is an easy read.  Not too many numbers which can be daunting to follow.  His insightful views start in the very beginning of the book when he explains the "undefined" words used by politicians of today such as 'fair'.  There is no standard definition of the word fair nor for its brother 'unfair'.  However these words tend to move people and bring them together regardless of their respective meaning and sometime opposing results.


One of my favorite chapters in the book was on the education system.  He blows the lid off of the scam in the Ivie League schools and education in general in my opinion.  I will not lie, although I oppose political parties, Mr. Sowell does align with my own views on politics, society, and economics.  As I have said before in other reviews, I am fiscally more conservative than Conservative and socially I am more liberal than Liberals.  I disagree with using force to make others act as there are ALWAYS unintended consequences that require more force to try to deal with those.  It is like big-pharma, you take a medication that causes worse side affects than the initial problem; which is then treated by more medications etc, etc.


I read several review on this book prior to embarking on reading it myself,  Ironically, I found many reviews of people that criticized Sowell in the same manner they claimed he criticized his "subjects".  Claims such as "who cares how much green space is there is in Maine if you live in the park-free suburbs of some city..." well unless you are compelled to live in such an area, I do not see how this becomes a country wide issue.  Also "women get to spend their husband's money".  Firstly, Sowell never said that.  Secondly, I have been married for 21 years.  My wife and I have agreed to our particular situation.  I would much rather her be home with the kids and be home when they arrive from school than the income she had the potential to make.  I do not discriminate on others who choose differently though.

The book is great.  I think all should read it.  If you keep and open mind, you can see that he is using common sense.  If you read it with agenda, you will not get anything out of it.