This book has been on my "To Read" list for years, literally.  I had added it to my "Goodreads" account years ago.  I stopped logging into Good Reads but recently went back in.  I saw this on my list and I said "What the heck" #YOLO

What a great novel.  This book delivers crimes, love, deception, friendship, action, war; the recipe of a great book.  I truly cannot wait to pick up his next book that picks up where Shantaram left off.  Gregory David Roberts was actually in prison where he wrote Shantaram twice while incarcerated in Australia.  It was destroyed both times by prison guards.  Roberts re-wrote it when he got out.  I guess this is loosely (not so loose) based on his life. 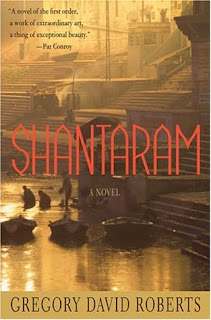 Roberts does a great job developing the characters although at first you do not think he will.  He dives into the history of Khaderbhai, Abdullah, Qasim Ali, Johnny Cigar, Raju, Vikram, Lettie, Ulla, Kavita, Didier and Karla.

Roberts describes the "Arthur Road Prison" scene and I felt anxiety as I was ready that chapter.  It was so vivid in my mind when I read it.  So much so, I felt like washing my feet after reading it.

** SPOILER ALERT **
I was devastated and almost brought to tears when Pravaker died.  It was so unexpected. I could relate that character with many Indians that are my friends.

Roberts describes Lin's cold turkey experience in such detail that it gives the reader a look into this taboo world of heroin even heavy drug users of other kind tend to stay away from.

The 'Big Reveal" by Khaderbhai and his subsequent death came about fairly quickly.  Although there were chapters in the book and certain instances where you question Roberts such as the bear.  I wish they would have elaborated more on the Lin/Lisa relationship.

Pravaker's son was a great chapter as well.  I would have liked them to have named the boy Pravaker Lin or something similar.  Lin felt responsible for Pravaker death since he bought him the taxi and Pravaker died while driving it.

After reading the book, I did some research on the author.  He has become somewhat of a recluse.  He created a "sign off" website where he asks for anyone to remove pictures and videos of him but only leave his "work".  I can respect that.  It makes you wonder how much of the book is reality and how much is the novel.  Here is a quote

"Some experiences from my life are described pretty much as they happened, and others are created narratives, informed by my experience. I wanted to write two or three novels on some bare elements from my life, allowing me to explore the themes that interested me, while keeping the narrative immediate by anchoring it to some of my real experiences. They’re novels, not autobiographies, and all of the characters and dialogue is created. It doesn’t matter how much of it is true or not to me, it’s how true they are to all of us, and to our common humanity." ~ Gregory David Roberts.

Out of respect for Robert's request,  I will not add his picture here.  I really wish Roberts would have continued to write.  I would like to read the follow up to this book.