Day of Deceit: The Truth About FDR and Pearl Harbor By: Robert B. Stinnett

I think it is safe to say at this point, that FDR knew the attack on Perl Harbor was imminent and did nothing to stop or alert of its pending doom.  What is unclear is if it was done in an attempt to cause the U.S. to accept us involving ourselves into the war, since he had come out in Public stating that he would not send our boys into war, to trust help the Jews or if it was in an attempt to save the economy  and his bad economic decisions.  What is clear, is that FDR was one of the worst POTUS this country has ever had. 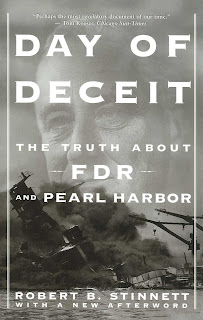 Franklin Delano Roosevelt, has been credited with posting Japanese Americans into camps where they lost all of their belongings, confiscation of the citizen's gold, the use of the IRS to go after his opponents, as well as using party politics to control "jobs" and other things necessary.  He paid farmers to NOT grow crops and slaughtered pigs instead of giving them to the starving citizens to control pricing.  There are many more, but suffice it to say, this man was bad news.  However he is still lauded as one of the greats.  Ironically, he was as Fascist as they come which is now hurled at any Republican President.

The book uncovers evidence that shows that we could have avoided the 1941 attack or at a minimum, lessoned the losses.  His sousing was truly a hero of mine, FDR was a far cry from Teddy.