Killing Kennedy: The End of Camelot By: Bill O'Reilly and Martin Dugard

Interesting book however the book is more about "living" Kennedy than "killing" Kennedy.  Also, one thing to note is how large the author's name is as opposed to the tittle of the book. 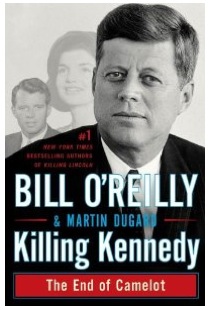 The book is typical O'Reilly; entertaining. However nothing new in this book.  Probably the most interesting "fact" he brought to light was that his ancestors are Kennedys which was self-serving.

With all that said, the book flows very smoothly.  It is informative regarding details of the Kennedy's life early on and throughout his later years.  However he does not touch on other possibilities of his assassination.  To O'Reilly, Oswald did it and no one else was involved.  Although I am not into conspiracies much, there are many different avenues not travelled by O'Reilly and Dugard.

The book is certainly a book you should read.  It is an easy weekend read although it should not be used as an exhausted source for the Kennedy assassination.  Ironically, O'Reilly's nemesis, Chris Matthews also wrote a good book "Jack Kennedy: Elusive Hero" which in my opinion does a better job of the early years of Kennedy but touches very little on the assassination.