This book was a great book regarding our 16th President of the United States.  This is probably my 50th book on Lincoln and heretofore, this is the one that has focussed more on Lincoln the man as well as Lincoln the consummate politician. 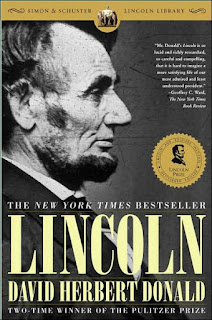 Anyone that has read my reviews of any works on Lincoln, knows that I am by no means a "Lincoln Lover".  I will try to keep me personal dislikes of Mr. Lincoln to a minimum and review the book itself.

The book is very well written.  It flows very smoothly.  The author attempts to not focus on the assassination or the civil war insofar as it is possible. The author gives ample time to his childhood as well as young adult life, after which it becomes much of the same as what has already been written.

The author is honest to some degree when he writes about issues that I and others like me hold against "The Great Emancipator".  However in many instances he white-washes Lincoln's decisions.  Lincoln was a shrewd politician and was not the "humble rail splitter" people make him out to be.  He was very smart and very quick.  His answers were calculated and everything he said and did was to further his career as a politician.  Maybe that sound harsh, but there are many sections of the book where he says something to the affect that he is not interested in a position or title, yet his actions tell a different story (e.g. his re-election).

One thing to note which is present in so many Lincoln books and quite frankly begs the questions; how can a state be "allowed back into the union" of which it reportedly could not leave?  Along those lines and specifically on the subject of secession, it is always interesting how West Virginia came to be since it was an act of secession from Virginia.... but I digress.

Although I have read many books on the subject, I did learn information I did not know prior to reading this book.  I recommend this book to anyone that is interested in Lincoln and/or the period in which he lived.