This is a book I probably would have NEVER read had it not been for the obsession I have with Abraham Lincoln and that period.  In one of the books I read about Lincoln, it said he would read this to his kids.  I enjoy "reading-what-they-read".  It gives me perspective into their lives. 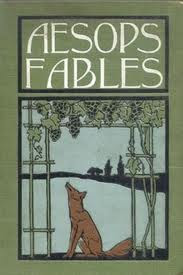 Aesop's Fables is an assortment of fables authored by a slave and who lived in Ancient Greece between 620 and 560 BC. Mostly of the fables involve animals which attempts to inculcate some moral value in the reader.  Truth be told, some of the stories may have made more sense when they were penned in the sixth century A.D. but now, you may need to do some research to find the meaning.  Some of the tales are a little dark, but then again, back then kids grew up faster.  In my opinion, we baby our kids way too long and the after math is adults that behave like children.