The Rise of Theodore Roosevelt by: Edmund Morris

Theodore Roosevelt was an amazing personage.  Energetic, charismatic, brave, intelligent, voracious reader and a Freemason.  I once read a book 'River of Doubt" by Candice Millard and almost immediately was addicted to "Teddy" the person.  I disagree with his politics on so many levels though.  With Roosevelt, I was able to see how you can like someone as a person while vehemently disagreeing with him politically.  I was “dee-lighted” with this book. 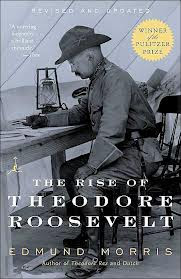 Theodore Roosevelt was truly an amazing man.  I do not want to say that he was a perfect man, but I think when compared to his contemporaries, his light shines a bit brighter.  He was a monogamous man, and man of principles that was not for sale.  His time as Police Commissioner earned him a reputation of an "untouchable".  Although he came from money, he was no sensitive aristocrat by no stretch of the imagination.  While many of his contemporaries were living high on the hog, Roosevelt was knee deep in the Badlands where even seasoned mountain men revered his stamina, courage and fortitude. This however did not detract from him earning the adoration from the very famous and wealthy Astors.  The Astors were not known for allowing just anyone into their sanctum sanatorium. They saw his potential early on.


Just one example of the person he was; One day, TD, as his family used to call him, was out with some fellow politicians and was  mocked by a man named J.J. Costello  because of his coat.  TD knocked the man down and then repeatedly struck him.  Afterword he told J.J. Costello, "Now you go over there and wash yourself. When you are in the presence of gentlemen, conduct yourself like a gentleman."

Roosevelt battled asthma and Cholera Morbus as a child and throughout his life.  He lost his mother, Martha Bulloch Roosevelt to typhoid and then his wife, Alice Hathaway Lee to Bright's disease hours apart on the same day; February 14th, under the same roof.  He was devastated.  He had one daughter with Alice.  For the first 3 years of Baby Lee's life, Roosevelt was essentially non-existent.  Roosevelt painstakingly removed all writings of her as to remove her existence for posterity.  He married again, ironically with his first love and childhood playmate Edith Kermit Carow. Interesting fact is that she came out supporting Hoover against her cousin-in-law/nephew-in-law Franklin Delano Roosevelt. His home was initially named "Leeholm" for obvious reasons, after his first wife passed away, he renamed it to "Sagamore Hill" taken from the head of an Indian tribe he encountered during his rancher days.
Teddy was known for his "spectacles and teeth", something he eventually learned to embrace.  He used his teeth as a tool of power while speaking to people.  On many occasions, people judge him as weak because of his "spectacles" 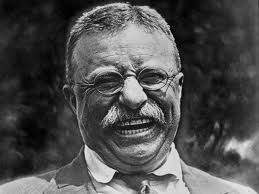 Roosevelt’s most celebrated feature—his dazzling teeth. Virtually every published description of the President, including those of provincial reporters who can catch only a quick glimpse of him through the window of a campaign train, celebrates his dental display. Cartoonists across the land have sketched them into American folk-consciousness, so much so that envelopes ornamented only with teeth and spectacles are routinely delivered to the White House.

When required to make a formal statement, he spoke with deliberate precision, “punctuating” every phrase with his own dentificial sound effects; the performance was rather like that of an Edison cylinder played at slow speed and maximum volume."

Morris describes the Rough Riders and the challenges they faced in Cuba.  This is where Roosevelt officially became a Colonel.  Morris also tells of the time in Cuba when Teddy decided to inspect a ship wreck. He jumped into the water with Lt. Greenway and started to swim out.  When they yelled shark!!!! Roosevelt did not skip a beat and continued to swim in spite of the shark saying that they would not bite.  In fact they did not bite him and there were sharks as large as 10'. 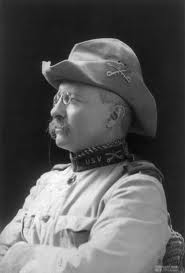 We weren’t out more than a dozen strokes before Lee, who had clambered up on the parapet of Fort Morro, began to yell.
“Can you make out what he’s trying to say,” the old man asked, punctuating his words with long, overhand strokes.
“Sharks,” says I, wishing I were back on shore.
“Sharks,” says the colonel, blowing out a mouthful of water, “they” stroke “won’t” stroke “bite.” Stroke. “I’ve been” stroke “studying them” stroke “all my life” stroke “and I never” stroke “heard of one” stroke “bothering a swimmer.” Stroke. “It’s all” stroke “poppy cock.”
Just then a big fellow, probably not more than ten or twelve feet long, but looking as big as a battleship to me, showed up alongside us. Then came another, till we had quite a group. The colonel didn’t pay the least attention.…
Meantime the old general was doing a war dance up on the parapet, shouting and standing first on one foot and then on the other, and working his arms like he was doing something on a bet.
Finally we reached the wreck and I felt better. The colonel, of course, got busy looking things over. I had to pretend I was interested, but I was thinking of the sharks and getting back to shore. I didn’t hurry the colonel in his inspection either.
After a while he had seen enough, and we went over the side again. Soon the sharks were all about us again, sort of pacing us in, as they had paced us out, while the old general did the second part of his war dance. He felt a whole lot better when we landed, and so did I


While reading this book, it dawned on me that although we are giving more money to education per capita , we are much dumber than those of yesteryear.  Gone are the days when the families would sit around and read from classic books and have discussions.  Nowadays the families text each other.  I honestly think that although technology-wise we have made great advancements, we have declined on most all other aspects of our humanity.
I always imagined the word "dude" being a surfer word that someone used.  Come to find out the word "dude" is actually a word and a word used frequently apparently in the circles TD ran.

This was an amazing book about an amazing man by an amazing author.  I HIGHLY recommend it.  Although being almost 1,000 pp, the book flows smoothly and kept me engaged at ALL times.  Not once was I tempted to skip any section or felt bored.  I am considering reading some other Morris books on Roosevelt.


Posted by Manny Fernandez at 3:01 PM