Once Upon a Secret: My Affair with President John F. Kennedy and Its Aftermath by: Mimi Alford

Marion "Mimi" Beardsley a young nineteen year old White House intern deflowered by President John F. Kennedy on the bed of his wife, Jackie Kennedy tells all.  This was no one-night stand.  The affair lasted over eighteen months and spread across the nation and even internationally. 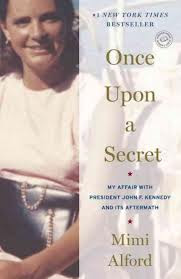 Beardsley, later Fahnestock, and ultimately Alford tells the tail of an impressionable young girl and how she was whisked off her feet by an older, extremely powerful and experienced man.  The book covers a whirlwind affair with the President of the United States, the fallout, Mrs. Alford suffered and her phoenix like recovery to find happiness.

It was interesting to see certain incidents that occurred during those months (e.g. Cuban Missile crisis, University of Miss) and from a different perspective; one that until recently was unknown.

The book is a short book , just over 200 pp.  I finished it in a couple of days.  The book however kept me engaged and really enjoyed it.  I saw an interview on The View and saw how those women treated Mimi as if she was denigrating divinity.  Shame on you ladies.

I recommend this book.