Running with the Devil By Noel E. Monk

This is a great book about the rise and sadly, the fall of one of the greatest bands in rock-n-roll history; IMO.  Anyone who followed this band as it rocketed to the top of the charts knows how this band essentially imploded in the 80's.  Many will argue that "VanHagar" was an equally impressive band, however that argument is easily broken.  Although I enjoyed 5150 and the other Halen/Hagar projects, NOTHING comes close to the feeling I get when I hear the opening riff of "Unchained" and the thundering voice of "Diamond Dave" 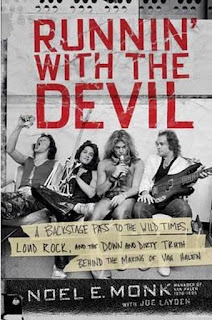 The author of this book is none other that Noel Monk, the band's manager for over 6 years during the "best" times of the band.  In this book, he discusses how he came to meet the members of Van Halen and how his role evolved in the "organization".  Monk was the manager for Van Halen from 1978 until 1985.  He was eventually fired as the manager allegedly due to Alex Van Halen's distrust and eventual desire to have his wife's family run the band, although I think there may have been resentment from Alex and his "friendship" with Jan, Noel Monk's wife.

Their on-stage characters are not far from the true characters of the band; at least from David Lee Roth and Michael Anthony's perspective.  Roth is a person that was addicted to the limelight.  I once met him at "The Doll House" in Pompano Beach, FL during lunch in the middle of the day.  He was there with a small entourage and we had no option but to sit with them since ALL the girls were gravitating to his tables.  He was full of himself, but at the time with reason.  He was the former front man of one of the greatest and iconic bands of my time.  As for Michael Anthony, Monk describes Anthony as a low-key, and overall good person which apparently seems to be the case.  I have never heard anything about Anthony regarding scandals or criminal charges of any kind.

The book is more about "Van Halen" the business as oppose to the music.  Monk describes the whirlwind life of the band and antics and quite frankly shenanigans of the band.  The turmoil that would ensue and eventually be the destruction of Van Halen.  Monk describes the substance abuses as well as the sex during the tours, man was there plenty.

In his book, you can see that Monk truly liked Eddie, (Edward as he refers to him) for his incredible talent and was amazed at how Eddie would treat the guitar as part of his body.  The tension between him and Alex is palpable as was his utter dislike of Roth.  Michael was almost absent in the book.  I assume this is because there is not much of anything from Anthony that could make a book interesting.  Monk introduced the band to the lucrative side of merchandising which netted the bank a great deal of money.

As with other incredible bands of the past, Van Halen were able to catch lightning in a bottle and yet their egos and inability to see things for what they were destroyed them.  I am sure, that looking back now, where Eddie, Alex, Michael and David are not really doing anything of value, they probably would have traded the egos for the opportunity to be in the likes of Rolling Stones and even Motley Crue (who were able to make it happen agin).  D

Definitely a well written book and at least for me, it was a page turner. I love(d) Van Halen.  Their music brings back so many memories.  Wishing they could put their differences behind them and make great music again.  Here is an article about Hagar and Roth touring with Van Halen and even Michael Anthony. It would be curious to see the other perspective, maybe of Alex Van Halen of what he perceived that happened. 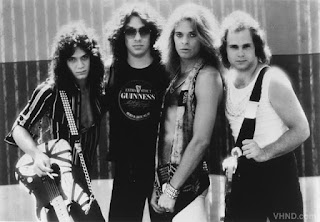 Posted by Manny Fernandez at 9:39 AM