Fantastic book.  Sure I am probably going to get hate mail for this comment but it truly was fantastic.  What I loved was his unabashed sense of being and his insatiable quest for freedom of speech even at his own demise. 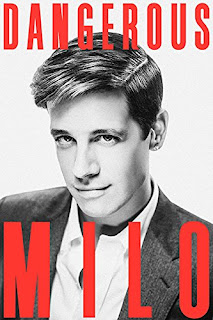 Yiannopoulos is a self proclaimed "Faggot, Kyke that loves black men" and a Troll Master extraordinaire.  Sadly, he makes valid points and points out the great ignorance by the left.  They are quick to call him a 'white supremacist' , a homophobe and a racist, however he is not easily housed in any of these categories based on his lifestyle.  He is similar to a Howard Stern that is 'shock jock' while Yiannopoulos is a self proclaimed 'troll'.

In his book he shows the inconsistencies with today's SJW (Social Justice Warriors) and the left in general.  The dichotomy of the left when vehemently supporting Musslims when they are completely outside of what the left purports to be against from a LBGTQ and women's rights as well as overall conservatism.  Yiannopoulos also calls out the media and states examples of their bias.  Anyone that watches any of the news channels should be able to see that the media outlets are extremely bias.  Aside from Fox News which is bias for the right, all other media is wholeheartedly leftists.  Gone are the days of media being non-bias and reporting the news as it happens.

I believe that political correctness and the identity warfare taking place is going to be the destruction of our society.  Today if you are a black woman, with one leg, lesbian, atheist, vegan, you have more 'value' as a black straight woman with both legs.  Eventually we are going to sub-divide ourselves into so many different groups that your identity will eventually disappear.

I do not identify with any groups, and no group speaks for me.  I am an individual and with that, I am able to think what I want on a number of subject without having to check what my 'group' stands for.  When you allow a group to speak for you, eventually your voice is silenced.  People use labels such as racist, homophobic, sexist etc so much, it has lost the sting it used to.  I would be irate if someone would have called me a racist 5 years ago, however today it is as normal as someone calling you 'dumb'.  It is sad because there are REAL racists, and sexists etc and their efforts and thoughts are being swept under the rug, essentially due to the ignorance of these label warriors.

I do not agree with EVERYTHING Yiannopoulos says, but being a libertarian, I can surely appreciate someone standing up for freedom of speech.

If you read this book with an open mind, you will at the very minimum get a glimpse into how ridiculous the detractors sound like when they contradict themselves.  If you are going to read it with a closed mind, DON'T, you will be trolled.  He will offend you with words like faggot, kyke, etc. He talks about his sexual orientation and his partners.  I recommend you read this book.

Here is a great interview with Bill Maher
https://goo.gl/4nXRCZ