The Big Lie: Exposing the Nazi Roots of the American Left By: Dinesh D'Souza


WARNING:  Political Discussion that may offend some of the Snowflake persuasion.

You may not like this author because he is very critical about Hillary Clinton, but I agree with much of what he rights in this book. I will break a few of those down in this blog post.

As for the overall review of this book, I can say that it is repetitive and at some points (many points) in the book, D'Souza is very partisan and very much acts like what he is trying to condemn. 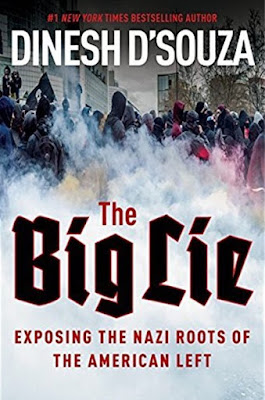 The book attempts to explain how the Nazis, Marxists, and Fascists are more akin to the Democratic Party than the Republican Party.  He makes good points although some of them are far off.  I do not agree with everything in this book but I think it is a good read.


On Race -  Although I do not agree that Lincoln was anti-slave, I can say that the Democratic Party has always been the party of slavery.  They will use the story of DixiCrats which is part of what this book talks about.  The Democratic party, with their policies, do nothing to advance those of different races.  They keep African-Americans (although I disagree with that term since there are "Americans" and "Non-Americans" to me, systematically oppressed by not creating situations where they can flourish and advance themselves.  The teach them that the government needs to provide them support in order for them to survive.

Yesterday I saw Bill Maher and saw Donna Brzille saying that if all the colored people came out to vote, it would be a "Blue Wave".  That is telling of what the Democrats believe.  They believe that Blacks are going to automatically vote D instead of R.  Furthermore, you see Black Lives Matter and how they systematically talk about "White People" and their hatred for "White People" yet it is perfectly acceptable and not only that but Liberals actually back and support them.  The notion of White Privilege is a farce. In an example where a white person lived in the projects, grew up in the same neighborhood, went to the same dysfunctional schools and came from the same socio-economic society as a black person and that somehow, they have some "privilege" is absurd.

Take "Affirmative Action" as an example.  Affirmative Action is the most racist thing in ages.  Take the example of a Fire Fighter test I took in the 80's.  If I was White, I needed to score an 80% on the exam, however if I was Hispanic, I only needed a 65%.  How can this be?  Because of who I was born to, I am incapable of scoring 80%.  Also, if I and a White man interview for the same position, and the White man has a better personality, interviewed better than me, and seemed to have a better attitude than me, the employer, ironically would HAVE to discriminate on the White guy to avoid being accused of discriminating against me.  Not to mention that black people think I am WHITE but white people think I am a Spick or a Wet-Back.  I lose either way.

On Homosexuality - The Left will tell you they support LGBTQ (And whatever additional letters are added), however they support Muslims which are on record for throwing gays from the tops of roofs. I support freedom of religion so long as it does not interfere or go against Human Rights.  My right to believe or not believe in whatever religion I want and that my life should not be endangered if I decide to not follow someone's interpretation of religion or non-religion.  Furthermore, I do not believe in "Gay Rights" and normally when I see Gay Rights people looking to sign petitions or collect money, when I give them the support, I tell them, "You should not try to differentiate yourselves from anyone else.  The moment you say "Look at me, I wear THIS label", you are by definition "Not Equal" to everyone else.  I do not believe in Gay Rights, because I believe in Human Rights which includes the right to bed and wed whomever you wish so long as it is a consenting adult.

On Women's Rights - This one is especially egregious.  If I would have said that Hillary Clinton looked too old, I would have been slammed by the Women Rights groups.  These groups are constantly looking to make an issue into a 'woman's' issue, similar to that race bater, Al Sharpton which does the same but on race. However, these groups were absent with the left decimated Sarah Palin.  Full disclosure, I did not like Palin, however there were WOMEN on the left wearing shirts that said "Sarah Palin is a cunt".  There was no outrage, there was no outpour of support for her.  Why not?  Did she not have all the lady parts?  No, what she did not have is a D on her voter's registration card.  Same for Michelle Bachman, Ann Coulter and any other woman that is part of the Republican Party.  If the woman's group want to be taken serious, at least by me, I need to see them protect Women not just Democratic Women. 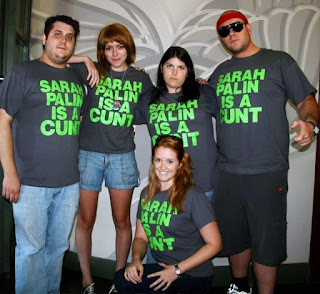 On Violence - For years you heard how the Republican Party was the party of violence and hatred.  However we have sadly seen that the Democratic protesters and demonstrators make the Republicans seem like a bunch of 1st graders with their level of violence and hatred.  The left CONSISTENTLY discriminate against Republicans merely because they are Republican or non-Democrats.  They are far more violent than Republicans by a long shot.  However the Left justifies it by the old Machiavellian philosophy of "The ends justify the means". It seems that bombing opposition as Bill Ayres did, beating up Donal Trump supporters etc.

On 1st Amendment - It seems that the 1st amendment is only in place and should be respected when it comes to ideas and agendas that advance the leftist's causes.  When a particular non-liberal speaker wants to come to a college to speak, the left will do everything in their power to block said speaker from speaking.  Not only that but if Rush Limbaugh says something, the left will immediately want to get him off the air.  The Republicans are less likely to do the same for an Ed Shultz or someone of the like.  The Right cannot speak it mind without being labeled a racist, sexist or homophobic.  It is sad that the left cannot see things more like their "Classical Liberal" cousins.

In general, the Left contradicts itself all the time.  They behave in a different way than they demand others to behave.  The sad part is that until the members of that party realize how contradictory their actions and their words are, we will continue to see the same.

In full disclosure, I am not a Republican or Democratic Party member. I am an independent and live by the following: