Wizard: The Life and Times of Nikola Tesla. Biography of a Genius By: Marc J. Seifer

Tesla was an amazing inventor.  Anyone who has followed him knows that he was an incredible inventor and although he applied for patents of his inventions, he lacked the business acumen to hold those responsible for infringing on his patents accountable. 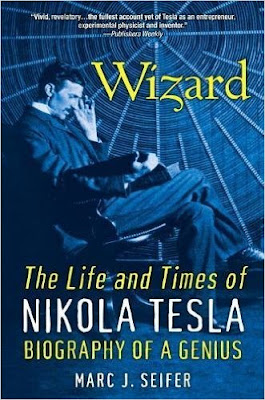 This book rife with details about Tesla's life. Communications to and from Tesla are carefully quoted in this book; sometimes ad nauseam.  The author makes some assumptions regarding Tesla's mental state.  Say what you will about Tesla, but he is directly responsible for many of the marvels in science that paved the way for what we enjoy today:

Radio - Although Marconi was initially credited, and to some degree, still today with inventing the radio, it was Tesla that invented it and the decision was later upheld in a court of law.

Electric Motor - And yes, Elon Musk's company is name after Tesla and the electric motor.

“Of all things, I liked books best.”
― Nikola Tesla