Lights Out: A Cyberattack, A Nation Unprepared, Surviving the Aftermath By Ted Koppel

There is nothing really new here for me.  As an InfoSec Practitioner, I have followed most of what Koppel covers here daily from the 'Cyber' aspect.  However this books covers more about prepping and survival than the actual cyber attack.  A lot of the material here though, is covered in the other book I read last year 'Cyber Storm' by Matthew Mather.  I do however believe that it is important to be prepared.  Maybe not to the degree that some of the interviewees stated.  I do think it is important to have food supplies that can last for an extended period of time, weapons and ammunition, supplies, tools and be informed on how to use them all.  If you own an AR15 but have never fired it, chances are you are not going to be able to effectively operate it or can run the risk of losing it to either lack of maintenance or incorrect use. 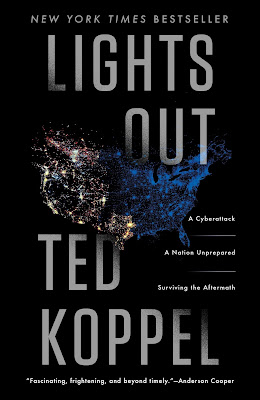 The book started off talking about the actual vulnerabilities that exists with the power plants and the infrastructure in general, however it then took a 'prepper' turn and which was maintained until the end.  The book was interesting and maybe for someone that has not already taken steps for an EMP and/or  general unrest, it may be very informative, I however am not that person.  I will say that he appears to have interviewed a lot of people for this book.  These days, that is diminishing with the media folks.