I have always been fascinated by Hawaii and how it came to be a state.  I do not wear rose colored glasses and I understand wholeheartedly of the incorrect things we, as a nation, have done.  From the Indians (Natives), Slavery, and imperialism.  Hawaii was a pristine archipelago of eight major island.  These islands did not even know mosquitos until the "invaders" started calling Hawaii home. 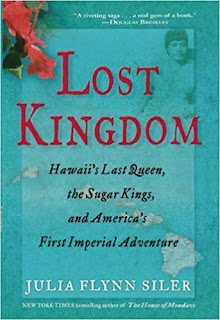 Hawaii, today known more for pineapples was actually a huge sugar source.  The islands were ravaged by people looking to buy up land and grow sugar.  The Hawaiian Islands where ruled by a king and although the royal family suffered unlucky issues with their health, the final Queen, Hawaii saw was Queen Liliuokalani.  It is sad to read the acts of the US to take Hawaii from her people.

This book covers the lives of the different rulers of Hawaii and the various "Sugar Barons" that set up shop and eventually became the downfall of the original Hawaii Monarchy and Hawaii's sovereignty.

I recommend this book to anyone interested in the history of Hawaii.