The Corporation; An Epic Story of the Cuban American Underworld By: T.J. English

This was a great book.  It struck a cord with me specifically, because growing up in a Cuban family with Cubans all around, "bolita" (illegal numbers racket)  was a normal thing we were used to seeing.  I had close family members that were "boliteros" (racketeers placing and taking bets).  This book takes place in many of the places I remember growing up around.

The book starts out during the pre-Castro era, when Batista was the Scum Bag de'jour.  The irony, which I did not know until reading the book, was the history of Baptista and Fidel.  Batista was the president of Cuba and was corrupt and in bed with mafiosos.  He lost a bid for reelection and moved to Tampa, FL.  Later he wanted to re-take his power and ran for reelection again.  Knowing he would lose, he decided to plan a coup.  Once he had taken power again, Fidel wanted to take Batista to court because HE believed that Batista was not properly elected and as such did not recognize Batista as president.  When attempts to bring him to court failed, Fidel himself assembled a coup and took the island nation for himself.  Later being more brutal and more corrupt than Batista ever was. 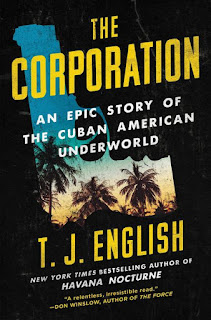 English then spins the web of criminality by Juan Miguel Battle, a Bay of Pigs "hero" and his rise and subsequent fall in a criminal enterprise between Florida, New York, New Jersey and even Internationally to Spain, Peru, and other countries. Along with family and friends who assisted Battle in his criminal enterprise.  Starting with numbers racket (which remained the staple of their incoming) and moving into murder for hire and narcotics.

The book is exceptionally researched and well written.  The one thing that bothered me a bit was the unnecessary use of Spanish words when the book was written in English.  Words like: Rata (rat), hombre (man), pronto (soon), barrio (neighborhood), La Causa (the cause),  patria (country).  These words were used when it was not necessary.  The English version would have sufficed.  Other than that, it was a book I enjoyed and plan to read other books by Mr. English regarding the Cubans in Miami.

Posted by Manny Fernandez at 5:48 AM