Perfectly Clear: Escaping Scientology and Fighting for the woman I love By: Michelle LeClair

Another Scientology books to add to my list of read Scientology Books.  This book however touches on a church taboo subject of Scientology; homosexuality.  Michelle LeClair was a young daughter of a Scientologist mother who was indoctrinated into the church at an early age after a close call auto accident.  LeClair struggled with her sexuality from early on.  Once she joined the "church", she was forced to publicly right off homosexuality. 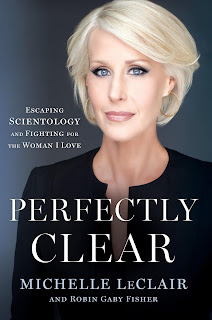 As all Scientologist, she was audited and was constantly questioned about her past transgressions by subsequent auditing sessions.  She was forced by the church to "find a man".  She eventually meets and marries Sean Seward.  Her relationship was rife with challenges one of which was he inability to be sexually active with her husband.  LeClair had 1 child, adopted another, and then in twist of marital rape, she becomes pregnant with twins before filing for divorce.  Eventually she meets someone that "does it for her" and she is a woman.  She soon realizes that she is in fact a lesbian.  However she needs to continue to hide it from the church.

Michelle is an absolutely beautiful woman.  The Church of Scientology has a website up that attacks her character. In full disclosure, here is the link.  I have read lots of books on Scientology and what I find interesting is that as long as she was writing fat checks, all was good.  LeClair gave up her lucrative career in insurance and has vowed to repay her clients their losses.

As I have stated before, I have read many books on this subject.  This book did not shed any additional light from a Scientology perspective, however this is the first book that talks specifically about the anti-LGBTQ mindset of the church.  For those that have not been exposed to the amount of information I have, this book does a good job in explaining the overall beliefs of Scientology and touches on many of the taboo parts of the church.


The irony is not lost on the the picture that Charlie looks similar to Tom Cruise; also a Scientologist.