This was an interesting book.  It focusses mostly on the 2016 election although I initially thought it was more of a general book about how FBI corruption has compromised the agencies integrity.  While it does deliver on the latter, it mostly focusses on Trump. 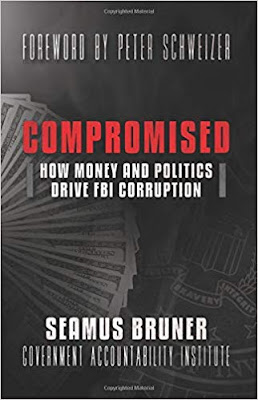 Bruner, delves into the corruption of the players involved in the Trump/Russia probe.  I have said before that if Trump is guilty of colluding with Russia to manipulate the election to win, he should be impeached and subsequently arrested.  However, by that same token, if Obama, Clinton and others on the Democratic side have colluded with Russia to enrich themselves, and if the Obama administration  has used the FBI to go after a political opponent, he too and his minions should also be arrested.  If the non-partisan prosecution of these criminals is not delivered regardless of party affiliation, it will only fuel the repeated crimes against us.

Based on the facts presented in this book, if you plan on accusing Trump of partnering with the Russians to enrich himself, then you MUST find that Hillary and Obama equally if not benefitted more from Russia then Trump.  If not, then you are Bird Boxing your view on reality.  Years ago after Obama's re-election, I challenged a colleague to write down everything bad he said Bush was guilty of, then I told him to create a second list pointing out the Obama parallel (e.g. Patriot Act, NDAA, Rendition, Bombing countries, deporting illegal aliens, anti-LGBTQ stances (e.g. gay marriage), compromising our 4th Amendment rights, spending, fast and furious, etc) and he would HAVE to come to the realization that either Bush was not that bad, or that Obama is not so good.  I challenge all the readers of this post to do the same with Trump and Obama.  The parties want us dumb and numb to these things so they can continue to play us.  All the while, these people are fleecing us with impunity.

Bruner shows the connections between  Commies and Muller and how they financially enriched themselves to the tune of 4,000% in Commies case specifically,  Additionally, it shows the cozy relationships with Russian players and companies and how it has gone un-reported.

I recommend this book, although it is very right leaning.  I tend to want to read opposing views and do not allow myself to fall into the vacuum trap.