The Royal Runaway By: Lindsay Emory

I am not a fan of the royals scene in England. I used to hate everything about it.  Not for the politics or anything like that, it was only something I really did not care about.  I thought they were hoidy-toity, until I started watching "The Royals" on the E! Hollywood channel.  It showed the supposed real life of the royals and how normal and flawed they were.  When I saw this book on Goodreads.com I decided to take a look at it.  As anyone that follows me knows, I will read three or four political books and then need to rest my mind and have some time to release my anger that I normally get reading about that subject.  I would mostly read biographies and memoirs but recently I started reading novels and such.  It is a good change in pace. 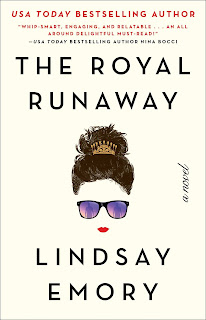 The book is about a Princess that is left at the altar on her wedding day.  She is banished from her kingdom to keep the press off of her story in hopes of letting the scandal die down.  Finally she returns and little did she know that the adventure had not even started and that now she would find herself in the middle of a royal mess (pun intended).

The princess escapes the palace to blow off some steam and meets a man.  Turns out it was a set up and the man is none other than her runaway groom's brother that is looking for him.  She is soon interested in him in a romantic way since he does not kiss up to her princess status.  She then finds herself in the middle  of a scandal that can bring the monarchy to an end.  A story of betrayal, embezzlement, lust & power.

I’m not going to lie, I really got into the storyline.  Emory wrote a follow up book and I am contemplating adding it to my list.  Reminded me of the E! Series.  Obviously not exactly the story but very close.

Posted by Manny Fernandez at 9:24 PM