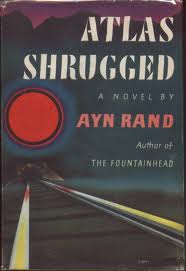 What can I say about this book?  It is probably one of the most amazing books I have ever read in regards to the way I think.

*** WARNING POLITICAL COMMENTS ***
For years I was a registered republican, and found myself at odds with where the party was going.  I knew I was not a Liberal, but I was not really a Republican (emphasis on the capital R) either.  I was not entirely sure where I stood in the political spectrum.  Once I read this book, it put it into perspective.

Book is a novel written by Ojectivist Ayn Rand.  The books was written in 1957 (I believe) it is a LONG book (~1,300 Pages) but you cannot put it down.  Book has a love twist as well as Ms Rand's own philosophy built in.  She shows through her characters how government interventionism causes nothing but loss.  Loss of work, wealth, self confidence and most of all, how it is corrupt, and its members [Government] are inept to fix it or even understand what the problem is.  The book does not call out "Republicans" or "Democrats", "Left" or "Right", "Liberals" or "Conservatives".  Nor does it mention any names of real politicians (at least during that time).  It is easy to put faces to her characters as we have so many politicians that come to mine that fit that particular situation.

There is action, love, politics, betrayal, lust and just an overall profound wisdom of the way "things work".

There was a movie adaptation for it although as in many instances, the movie does not give the book it's justice.