Escape from Camp 14: One Man's Remarkable Odyssey from North Korea to Freedom in the West By:Blaine Harden

This book is extremely disturbing.  There are acts of torture; physically, mentally and emotionally that will bring you to the brink of tears.  The level of abuse these people suffer under the thumb of the North Korean government is appalling. 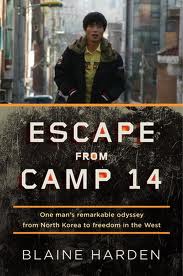 This story covers the life of Shin Dong-hyuk which was born in a North Korean labour  camp.  The author gives you insight into the camp itself, the ideology of prison life and the penalties of violating the rules.  Shin witnesses and indirectly participates in the hanging of his mother and execution of his brother for attempting an escape from the camp.  He is then tortured himself within an inch of his life due to their attempted escape.  Finally meeting up with "Uncle", an old man imprisoned with knowledge of the outside world and enough medical knowledge to nurse Shin back to "normal".

Shin in befriended by a 40 year old political prisoner from Pyongyang, Park, which has firsthand knowledge of the outside world and himself escaped to China with his family, only to have himself and family imprisoned when he returns to North Korea to vote. They spend many hours discussing the outside world.  Ironically, the allure of freedom was not as appealing to Shin as was the promise of meals.  They plan an escape and Park loses his life while attempting to escape, however Shin is the benefactor of Park's death and uses it to his advantage.  This brave man, without any knowledge of geography, no concept of money, no connections, no help was able to make it out of the camp and make his way through freezing temperatures and hostility out of North Korea and into China.


The book also covers the "adjustment" period of Shin once he makes it to freedom.  I was impressed with the "Unification" program of South Korea to assist the North Koreans.  They house, feed, provide medical and dental care and even take the North Koreans on field trips where they take them shopping and have them interact with South Koreans.

The saddest part about this story is that although he escaped physically, it is painfully obvious that emotionally, he is still a prisoner because of the irreversible damage caused by his up-bring and travels heretofore.

Posted by Manny Fernandez at 10:26 AM