This is not my normal type of book.  I was pleasantly surprised.  During the reading of this book, I was involved in a very high profile project that demanded most if not all of my time.  I found it hard to "Kindle time".  However I tried to make time.  It kept me engaged throughout the book.  The book not only tells the tale of the Osama Bin Laden hit, as this is precisely what it was but also the tale of a Navy Seal and his struggles through the gruelling training to become a SeAL and more especially DEVGRU (SeAL Team Six). 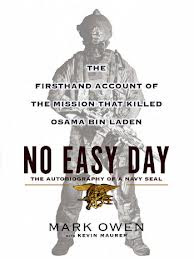 The book flows well.  There is plenty of gun speak but not enough to make you nauseous.  I enjoyed it again to my surprise, but not sure I could read another book about the OBL hit.

This book attempts to tell the story without the usually accompaniment of media fanfare.  The epilogue explains that the story being told by the media is wrong.  It dispels the notion that OBL had a weapon and even attempted to use one.  The author explains how OBL's son was shot and that he too had made no attempt to shoot back.  The books makes it obvious that those inside the compound had more than enough time to mount a defensive manoeuvre but did not or could not.

Reminds me of a saying, "Communism is for the people, not the communists" with all the talk about giving your life for the jehad, you see that the ones behind the curtain are not willing to walk the walk.


Posted by Manny Fernandez at 4:51 PM