I will begin by saying that I am not a fan of the Chris Matthews of MSNBC, however THIS Chris Matthews is a far cry from his MSNBC on-air persona.  I was shocked when  reading this book how non-partisan he was especially writing about a Democratic leader. 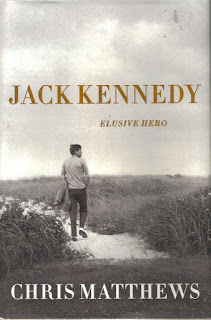 I was surprised to find out that Matthews was a Republican prior to being a Democrat.  This book is not what I would consider a "biography" although it has all parts of one.  It is primarily the political biography of John "Jack" F. Kennedy.  Matthews does a good job in painting the political life of Jack Kennedy.  The book covers that efforts leading up to the Senatorial Campaign, and the ultimate position of President of the United States.

The book paints Kennedy, in what I perceived as a fair depiction.  Kennedy was by no stretch of the imagination a saint.  However he loved his family.  The loss of his son Patrick in the book was heart breaking.  The book tells of Kennedy "weeping" while locked in his room.  You also see a side of Kennedy as a shrewd political tactitioner that would do whatever it took to gain power.

Kennedy was faced with many International issues during his tenure.  The Cuban missile crisis being one of the most memorable.  Being of Cuban decent, I was shocked at the incident of the "Bay of Pigs" and how Kennedy dismissed it and the people who fought and gave their lives.

I am an avid reader of Abraham Lincoln.  There are many similarities with their lives and quite frankly, their death.  Joe, the father seemed to be a shady guy interested in crony-ism.  His father seemed to want to parley his sons success to his advantage.  The sons not showing any signs of not wanting to help.

I always wondered the fascination that Matthews had with Obama's election and how awkward it sounded.  After reading this book I can see the similarities in how he felt about Kennedy being the first Irish Catholic to run for POTUS.

The book is well written in my opinion.  It flows well.  His assassination was only mentioned insofar as Mrs. Kennedy planned his funeral.  The book piqued my interest in reading some other books on this subject, more especially Joe Kennedy.


Posted by Manny Fernandez at 8:59 AM