Volume 1 of 6.  An astounding feat by any standard.  This book is an exceptional history of Thomas Jefferson.  The level of detail regarding Jefferson's family and early life is better than anything I have read to date.  By no means do I have an exhaustive list of works on Jefferson so that comment can be taken at face value. 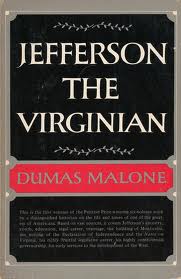 The book attempts to explain the many facets Jefferson's life as an architect, naturalist, jurist, political theorist, governor, philosopher, inventor, the list goes on and on.  Jefferson was a extremely learned man and was a voracious reader.  He served as Secretary of State under Washington, Vice President under Adams and finally becoming President in March of 1801.  Thomas Jefferson is certainly one of my favorite founding fathers.

This is truly a biography in all sense of the word.  It is not a watered down 300 page book.  The author gives you details into the life of the great man.  The book is written in the English of that period so it made the book that much more enjoyable.

The one criticism I have of the book, is that most of the information gained in this book appeared to be mostly positive.  Although I love Jefferson, I am sure there are things that were left out in an attempt to protect his name, I assume of course.

I can't wait to get started on Volume II