The Racketeer By: John Grisham

OK.  Now THIS is what I expected from a "John Grisham" book.  If you read my review of "The Litigators" by Grisham, you would know that I was not impressed with his work.  I will say that many people raved of his books.  I did not read "The Firm" but I did watch the movie and was, as many, surprised at the twists and turns of that story.  This was going to be the last chance I gave Grisham.  Man am I glad I did so. 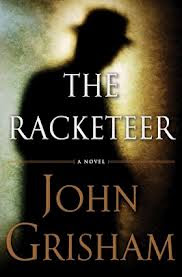 This book, as apparently many others of Grisham, involve lawyers.  It is well written and to me, a page turner.  The book is essentially divided into two parts and in reality, three.  The first section deals with Malcom Bannister a former lawyer in a Federal Prison for racketeering charges.  He claims to be innocent.  He has served 5 years and  his wife has left him and subsequently re-married.  Malcom is the prison librarian and the unofficial adjunct attorney.  The prison is what is known as a "Federal Country Club" since there are no fences or barbed-wire.

A Federal judge is murdered and Malcolm sees a way he may be able to use this as a way out of prison.  Utilizing Rule 35 stating that a prisoner helping solve a crime committed outside can be given commuted sentence and even witness protection.  Malcolm is able to give the Feds a name of the murderer but ONLY after he is guaranteed release.

As always, nothing is as it seems and soon Grisham spins a web of intrigue that involves private jets, Caribbean islands, murder, lies, and twists.  The second section of the book is the one that builds the story up to the great reveal in the third section.

*** SPOILER ***
I will be honest, the first part of the book where Malcolm is released and is in witness protection was great.  Then the film-making part started and I said, "great, here we go with the anti-climactic garbage again".  Man was I pleasantly surprised. I love the fact that gold and not cash-money was involved as it gave it a more international allure.

It was a great book and I can't wait for it to be made into a movie.  I am already picturing the cast.  Denzel or Will Smith as Malcolm and Vivica A. Fox as Vanessa, Toby McGuire as Nattie.