Blood on the Moon: The Assassination of Abraham Lincoln By: Edward Steers Jr. 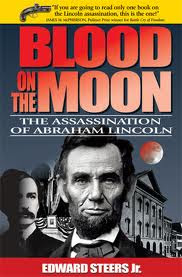 The book claims that John Wilkes Booth was a "white supremacist".  Although this may be so, Steers infers that this is why Booth hated Lincoln.  However when we look at the definition of 'white supremacist', we see the following:

"a person who believes that the white race is inherently superior to other races and that white people should have control over people of other races". - Merriam-Webster dictionary

Based on Lincoln's own words, it is obvious that both Booth and Lincoln were "white supremacists".  Even more damning than his own words, was Lincoln's actions.  Lincoln is known for his colonization efforts where he wanted to send all freed blacks out of the country.  This is known as today as the "Not in my backyard" syndrome.

I know that I am critical about Lincoln and his actions, but I have read quite a bit of books on the subject and find that normally his assassination washed away his tyrannical actions.  Although I believe his fate was not right, I do believe that history as well as Hollywood has done a disservice to us by white washing (no pun intended) his actions.  Anyone that has done any kind of research on Lincoln knows that he was a a corporatist and believed in cronyism, tariffs and big central governments.  His emancipation proclamation freed no one, as it only pertained to the southern states, to the four slave states still controlled by him, not so much. Ironically, Lincoln said "History is not history unless it is the truth" yet so much about his past is not true.

The book is extremely well researched and was somewhat of a page-turner even for me that has read about the subject time and time again.  The greatest part of the book is how the author dispels the the Lincoln Conspiracies even though some of the arguments are a bit weak.  I recomment this book to any Lincoln scholar (those who insist on his deification as well as those that see him for his actions and are able to put aside his assassination).