Disturber of the Peace: The Life of H.L. Mencken By: William Raymond Manchester

I must admit, I never knew who H. L. Mencken was until I saw some memes on Facebook with his quotes.  It piqued my interest.  He was a man that spoke his mind even when it was politically or socially "incorrect". 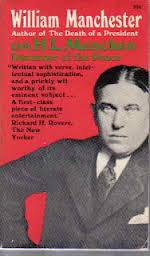 Second generation American of German descent; I use the previous term in that way because I consider those who emigrate to this country and adopt it as their own, should not hyphenate their name.  Son of a cigar maker, Mencken did not want to follow his father's footsteps.   Henry loved to write and aside from a short time trying, and failing to run the cigar business, he finally got a chance to write for a paper.


Henry, as he went by as a child, took on his "H.L." moniker at an early age when his father got him a printing press for Christmas and in the process of setting it up, his father broke many of the lower case letters.  He liked how it looked and it stuck.

Mencken was a clever pundit, academic, critic and author.  He was a voracious reader and was reported to have read upwards of 300 pages in one night on a regular basis.  He always read lying down.

He was ruthless in his criticism towards religion (Christians), politicos as well as social/communists.  I know some may not like him, and that is fine, however I love his wit and although I could take some of his quotes to be offensive, I enjoy and respect others free speech. Mecken was the 1920's version of Larry Flynt meets Bill Maher meets Howard Stern.  Hated by many and respected by few.

If you like Mencken, this is a good book to read.  I enjoyed it.

Posted by Manny Fernandez at 10:41 AM