Two Presidents Are Better Than One: The Case for a Bipartisan Executive Branch by David Orentlicher

The book was has an interesting view.  It obviously promotes the plural executive concept.  This is not a new concept although I have never seen other books that cover it as this one. 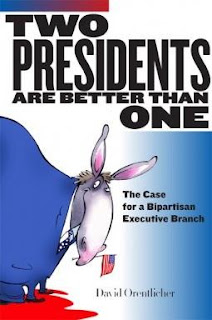 However my opinion is as follows:  Our current system was designed in a way that keeps the government in check.  It has not worked not because of the design but the way we the people have allowed the courts to legislate from the bench and the Constitution to be usurpted with organization such as the EPA that were designed in a way that is outside the reach of the President and are not held responsible.  These organization should not operate outside the reach of Congress and the President.  I believe that if we fix the outrageous interpretation of the Constitution and remove the power from the 3 branches as well as forbid them from setting up autonomous systems that is outside of public scrutiny and approach, the system would go back to its working order. This is the way to do this.

1.  Change "We the People" in the preamble to "We the States"
2. Change Article VIII "To regulate Commerce among the several States"
should be changed to "To keep commerce regular..."
3. The 10th should the word "Expressly"
4. Repeal 16th Amendment
5. Repeal 17th Amendment