The State of Affairs: Rethinking Infidelity By: Ester Perel 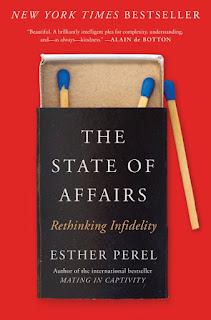 This book is interesting because it touches on many people's lives.  It discusses the sexual side, commitment side, the betrayal side, and the aftermath.  One of the great lessons from this book is, "what is your definition on monogamy?"  For some, that question eludes them while others have a good understanding of what it means.  For instance, "I did not have sexual relations with that woman" ~ William Clinton when he spoke about having Oral Sex with Monica Lewenski. Really?  Really?  Is it watching porn?  It is engaging in inappropriate conversation with a co-worker?  Is it a cigar in an inappropriate place and oral sex?  Some religions even state that lusting over another person is tantamount to infidelity.  I guess you need to ask yourself and your partner to be sure.

Perel discusses the many reasons for infidelity.  She dives into non-sexual relations stemming from either party, emotional void, and many more, but I thought the most interesting one was that a person sometimes will cheat because they are looking for another "themselves".  Someone that they could have been.  The book draws some conclusions that I do not necessarily agree with but the book will definitely make you do what the title says "Rethink Infidelity"

Perel was born in Belgium, studied in Israel and finished her studies in the US.  She is an amazing person to listen to.  She also has a Podcast "Where should we begin".  I learned quite a bit from this book.  I learned that the hurt that cheating causes the other party is not worth the temporary pleasure of the affair.  Also that what used to be taboo many years ago; leaving your spouse for cheating, has been turn on its head today.  Today, the taboo thing is staying together after an affair when you can leave.  She discusses heterosexual as well as gay couples so wherever you find yourself in the spectrum, you should gain perspective from the book. 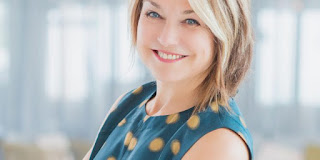 Posted by Manny Fernandez at 10:43 PM