The Great Revolt: Inside the Populist Coalition Reshaping American Politics By: Salena Zito and Bradd Todd

This was an interesting read to say the least.  Not your standard political book.  This book contains interview like vignettes of voters explaining their mindset and subsequent decision and vote for President Donald Trump.  This book covers the states, counties and cities that have historically been hard-core Democratic strongholds. The very same that rocketed President Barak Obama into office during his tenure.  Ironically, many of the voters were still looking for that change promised by President Obama. 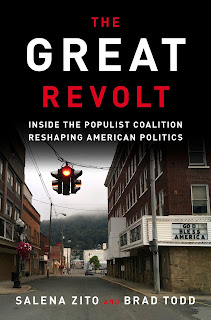 The authors describe in statistical detail the numbers involved and the margins when compared to Senator Hillary Clinton that got Trump elected.  The irony is not lost when the very same voters that elected Obama into office, somehow became sexists and racists to deny the Presidency to Clinton.  I recommend reading this book to understand from a person's perspective outside of your "circle of trust" and the folks that tend to agree with you.

Strangely enough, the Republicans were attacked during Obama's administration for being violent, insensitive, hurtful, and other pejoratives; fast forward to the Trump Administration where members of his cabinet are being thrown out of restaurants with their families, and shouted out of other restaurants for simply existing.  The physical attacks against Republicans was never seen by the Tea Party.  The level of disrespect towards this President is insane.  Is he a lovable guy, probably not (for the record, I do not know him personally) but Obama was equally offensive to many of the people he spoke about and then things he said, he was much more suave and debonaire at saying it.  However anyone speaking ill of Obama was immediately and ceremoniously labeled a racist.  Similar to the "woman's groups" that allowed Sara Palan to be repeatedly annihilation by other women and men and NEVER stood up for her.  Even in the face of leftists women (and men BTW) wearing "Sara Palin is a cunt" T-Shirts.

The books shows you that many people see right through the rhetoric and see how unhinged the left has become.  For the record, I am not a Republican.  I do not watch Fox News and I am not a Tea Party member, a racists, sexist, homophobe, a Nazi or anything of the sort.  I am however not blind to the double standards being used by the left.  I welcome others opinions even when they do not match mine.  I promised that I would keep an open mind about Trump as I did about Obama and Bush.  Both Bush and Obama let me down in a big way.  Not so much on how they spoke, or  carried themselves but what their policies did.  Will Trump let me down?  Probably.  My standards for POTUS are more in line with Anarchists.  I believe the Constitution limits the Federal Government and it is specified EXACTLY what the branches of the Federal Government can and cannot do.

Sadly, if we continue down this route where political correctness is demanded but only when talking about the things that are important to you, but when anyone disagreeing with you, you can go at them with everything you have, we are doomed.  Today I was listening to a show about Sarah Sanders and how the owner of the restaurant "that is a majority of LGBTQ workers" said "We do not want to serve her".  This is insane.  The ACLU said it was OK.  This is from the people that went after a baker for not baking a cake for a same-sex wedding?  These are the ones that espoused their moral indignation against anyone that was discriminating against anyone.

Here is the rub.  I do not believe in "gay", "women", or "X", "Y" "Z" rights.  I believe in Human Rights.  There is no need to differentiate yourself because of your sex, orientation, color or anything else.  WE ARE ALL EQUAL.  The issue with that is that now, "Gay" people are of more value than a straight person.  I cannot refuse to make a cake for a gay couple, but I can kick you out of a restaurant because I disagree with you, your political party etc.  In this example, the "gay" person is of MORE value to society than anyone else.  It is identity politics 101.

I hope that this country turns their crap around real soon.  There is nothing good on the horizon if we continue like this.  The level of vitriol coming from the Democratic Party needs to be shut down.  We need to love one another and tolerate other views and opinions.  One last note, if you have any integrity, you would admit that Hillary was a bad pick.  She has broken laws.  That is a FACT.  I had to face it when Garry Johnson (aka Mr. Aleppo) and John McAfee (oh geez) ran on the Libertarian ticket.  I was mortified to associate myself with them.  Dems should do the same with her.  It only hurts your narrative when you would allow Clinton to walk and then go after Trump for what equates to the "Birther Movement" of today.