The Real Lincoln By Thomas DiLorenzo

I read this book way back in 2011 It was actually my first review in this blog.  I read it again this week.  In this book, DiLorenzo dives into Lincoln's unconstitutionality with regards to the secession of the south as well as the tyrannical ways of Lincoln.  Throughout my life, like most people my age, we grew up thinking Abraham Lincoln was "the best President of the United States".  We were led to believe that Lincoln was a staunch pro-black, anti slave abolitionist, but a cursory review of the facts tells you otherwise.  The fallacy of his reasons to go to war to "free slaves" is not only false but ridiculous to repeat.  For years I listened to people refer to the "Civil War" as the "War of Northern Aggression" and I had never REALLY understood, in detail what they meant by it.  This book will shed light on that phrase and details the ways of "Honest Abe".  He was in FACT a white supremacist, anti-black, and at best, indifferent on slavery. 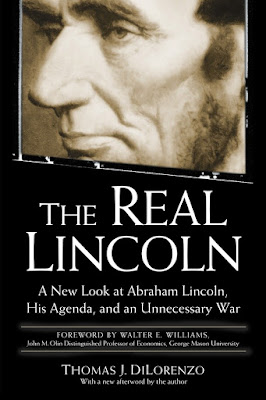 Lincoln was a Whig; first and foremost.  He was all about centralizing the power in Federal government as well as centralized banking and the "American System" advocated by Henry Clay in the early 1800s.

American System: "the policy of promoting industry in the U.S. by adoption of a high protective tariff and of developing internal improvements by the federal government" Merriam-Webster Dictionary

Here are a few key points covered in this book

I can go on and on, but I definitely recommend this book to any one looking to see thing outside of the revisionists view.  The fact is that anyone with 30 minutes and an open mind will see that the Civil War was NOT for the plight of slaves but rather a power grab, that to this day corrodes our states rights, a financial issue, and a Tyrant.   Lincoln controlled the media at the time.  He imprisoned news papers that did not support him 100% or wrote against him, any law maker that did not do the same was also imprisoned and in some cases deported.  He was the poster-child for tyranny.

The irony though is that both of today's political parties want to claim Lincoln as their own.  Democrats will throw the "Dixiecrats" where somehow the "good" republicans and all their good things changed sides while the "bad" republicans and their ilk stayed behind.  The reality is that most of the dictators of this world that have committed atrocities against their people have quotes Lincoln and followed his lead including Adolf Hitler.  Both parties should distance themselves from Lincoln.

I am not a "Greatest President Ever" kool-aid drinker.  I do not view him in only a negative light either although there is more than enough reasons to detest him for what he did, but conversely thinking that somehow this guy was some kind of angel from God sent here to free the slaves and be the "honest" president is cultish and sadly ignorant.

I highly recommend this book.