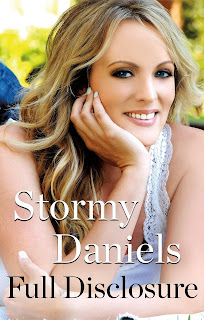 The book starts off with Daniels making it obvious that she is setting the stage for her final chapters where she drops the Trump story.  Daniels overtly talks about her "photographic memory" and how "smart" she is.  I feel this was important for her because even though she appears to be proud of her past, she makes a point to break the stereotype of "dumb blond" & "whore".

Daniels make a comment about how her story was "the biggest political scandal in history", obviously delusions of grandeur.   Stormy makes it clear in the beginning of the book that her aspirations were to be an author.  She claims her "photographic memory" yet on numerous points, was not able to remember facts and names.

Daniels talks about her tryst with Trump but fails to give details about her though process making her decide to actually have sex with him.  She goes from Trump sitting on the edge of the bed, to laying with my head against the pillow and Trump going "in her".   She was repulsed by him based on her many, many comments as such but still decided to have intercourse with him?  I am not judging her decisions by no stretch of the imagination.  I am a libertarian thinking, independent party and do not have a problem with anyone's life decisions.  Fiscally, I am more conservative than Conservatives and socially, I am more liberal than Liberals.

Her life is certainly interesting and I do think she is a successful business person and smart.  I will say that although I am not a "Trumper", I do not see any difference with Trump wanting her silenced, to Bill Clinton wanting the same or from anyone, ever that has been unfaithful to their spouse.  Attorneys exist to protect their clients.  It comes with the territory.  I am going to say this, I really have a problem with both parties taking the moral high grown when it is politically expedient for them.  The Republicans have a long history of being anti-gay, which is one of the reasons I left the party; not because I am gay, but because I do not have a problem with someone choosing to be gay, all-the-while getting caught in gay sex or pro-gay situations.  By the same token, the Democrats seem to be pro-women unless the woman is a Republican. People like Trump with the "grab them by the pussy" statement mortified Democrats because he was "talking" about assaulting a woman, yet Clinton somehow gets a pass when has was accused of actual rape?  The Clinton victim(S) are written off and attacked by Hillary as part of the "vast Right wing conspiracy".  The interesting piece of that last statement is the during the Supreme Court nomination of Kavanaugh, anyone that questioned the validity of the accuser was labeled a sexist and supporting rape, but Hillary was not afforded the same treatment after she, being on record, bashing the accusers of her husband's rape and assaults.

I think she really exaggerates the security thing.  Does she really think that Trump is going to whack her? Really?  Come one.  Trump is an assassin as much as Clinton (which BTW, Hillary has a more believable assumption a la Seth Rich) is.

As I said before, the book is entertaining but as far as any enlightening information, it is void.  Trump has and will lie, but then again, both Clintons did as well and to this day, continues to do so.  As did Obama and every single politician even my heroes George Washington, Thomas Jefferson and James Maddison.  This new mid-term election results will give the Democrats the ability to right the wrongs regarding the violence and vitriol coming from their side.  We shall see if it is more talk as we have seen in the past from both sides.