My Mother Was Nuts By: Penny Marshall

This was a great book. I had it on my list for a while and decided to read it while I was reading the Robin Williams book.  While reading the book, one day I was at the Supermarket and saw a special edition of a magazine titled "The Penny only we knew". It was weird timing to say the least.  The book however is very funny and keeps you interested at all times.  She certainly had a remarkable career and was surrounded by famous and interesting people all of her adult life.  Although her brother, Garry Marshall, gave her he first break in front of the camera, she nailed it and became not only a huge success in front of the camera, but equally if not more successful behind the camera as a director. 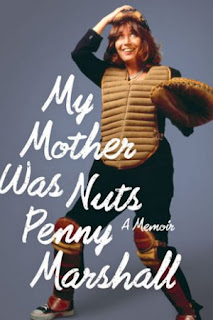 Along the way, she had a daughter with her first husband and later had an abortion and a subsequent miscarriage. She traveled the world and had many close friends in the music, TV and movie industry.  She became lifelong friends with Carrie Fisher (Princess Leia of Star Wars) and dated Art Garfunkel, and in the end her friends were an integral part of her life. I loved how she referred to people like Bobby D for Robert DeNiro, Artie for Art Garfunkel etc.
Penny Marshal was not the sweet little girl. She was kind a freaky and did a lot of dope. She seemed to have been a fun person to hang with. Sadly a few years after writing this book she lost her brother Garry and her best friend Carrie Fisher.  In the book she covers a lot of friends that had died.  She is now with them. It is a huge loss with her death. She will always be remembered. The impact that her and her brother had on TV and the big screen will be hard to match.