Grateful American: A Journey from Self to Service By: Gary Sinise

An amazing "A-Political" book by an, unbeknownst to me until now, amazing person. It was not what I expected.

Sinise opens up and shares intimate details of his life; past, present and future. I obviously knew who he was and had seen his work, but I had never actually put it all together in the aggregate. After reading the book, I realized that not only was he an amazing actor, business man (Steppingwolf ), humanitarian, community advocate, Christian, but an amazing person in general. 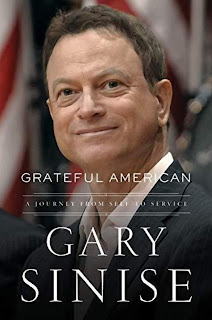 The book starts, as expected with his youth and how he discovered acting which eventually saved his life. He was not a criminal as a youth, but he recognized he was heading in the wrong direction. He started a theatre company that today continues to thrive and is recognized internationally with John Malcavich and others, including his future wife. Sinise covers his exploding acting and directing career on and off broadway as well as movies and TV. The later chapters cover his amazing work for the servicemen and women and children of the same, not to mention foreign children the same.

The chapters on his wife's alcoholism were especially moving and emotional for me. His never ending support and love for his wife during her darkest time was fuel for me and made me analyze my love and support for my wife. Luckily for me, it is my wife that has been there for me during my darkest times and for that I am forever grateful.

Sinise and his various organizations do an incredible job with our military personnel. At many times during the book, I actually had tears in my eyes. Being a former Navy member brought back a lot of my memories of my time serving during the Gulf War. Although I have done a lot of events to support the Wounded Warriors, I see that I have not done as much as I want or should.

Buy this book. Buy a few and give them out. I ordered five for my local Veteran's home. Support the various organizations as liberally as you can. These orgs are non-partisan and help the troops that protect us regardless of the party in power. Calling what Sinise does with vets "amazing" is an colossal understatement.

I recommend this book wholeheartedly. Sinise, although not a vet, is a true hero. When you are around and about and see a military person, pick up their check. This was done to me while I was in the airport coming back on leave. It stays with me today and I remember exactly where I was and how it made me feel over 28 years ago.