But Enough About Me: A Memoir By: Burt Reynolds

Many years ago, I had the honor and pleasure to meet Burt Reynolds and his then wife, Loni Anderson.  Burt was absolutely the nicest famous person I have ever met.  He was genuine, and extremely down-to-earth.  I was installing carpet in their home and he ordered food for us and asked me what I wanted to watch from his movies, I told him Cannonball Run (the first one).  He watched it with me and my co-workers.

This book documents his life as it is expected.  Reynolds had an amazing life and amazing career.  The people he knew and surrounded himself with is a who's-who of Hollywood. 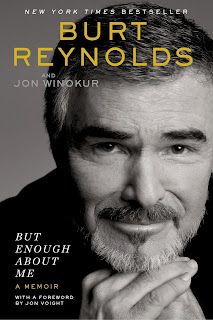 I was amazed to read about how he really did not love Loni Anderson.  You would have never suspected that from the way they treated each other.  Reynolds talks about his various movies and appearances on the Tonight Show.  He describes his friends from Hollywood and the women he dated and slept with.  I am sure it was a cursory list. Reynolds had an amazing career and I am surely going to miss him.  I am going to marathon watch Smokey and the Bandit and Cannonball Run (all versions).  Reynolds was a fellow Floridian and lived here until his death.  Sally Fields was the one that got away from his perspective.  Great book.  I recommend it if you are a Reynolds fan.