A very sad book.. Chris Farley was one of my favorites.  Farley and Kinnison, sadly both taken too soon.  This is a book told by the many people in his life.  The authors compiled memories and moments by many of the special people around Chris.  He was such and amazing comedian and for his size, surprisingly nimble and athletic. 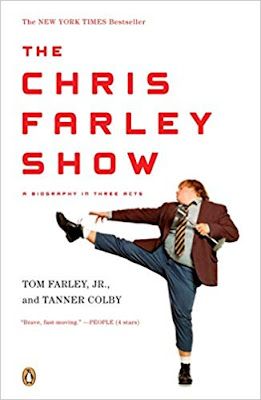 Chris Farley struggled with sobriety since early on.  He was also addicted to food and struggled with weight; something I know all too well.  Although everyone knows what the outcome of his life was, I found myself wanted to continue to read and hear more things about it.

Chris was a cast member of SNL and went on to star in many number 1 movies, Tommy Boy being one of my favorite movies today.  SO SO Sad.  Chris' family was very important to him.  However his father was painted in this book as being an enabler and did so to Chris since he himself struggled from some of the same demons as his son.  His father died a year later.

In his last picture shown above, taken by the prostitute he was spending the evening with was taken as she was leaving the room and after she stole his watch.  His last words were “Please don't leave me."  Still chokes me up after so many years.  If she had called Fire Rescue, he might still be with us today.  R.I.P. Big Guy.  You will be forever missed.  Often imitated, but never, ever duplicated.