Doesn't Hurt to Ask: Using the Power of Questions to Communicate, Connect, and Persuade By: Trey Gowdy

I have always been impressed by Congressman Gowdy.  Although my political views are not really represented in the House or the Senate, I always thought Gowdy was thorough, intelligent and a pit bull.  I first I thought the book was a political book but thankfully it was not. 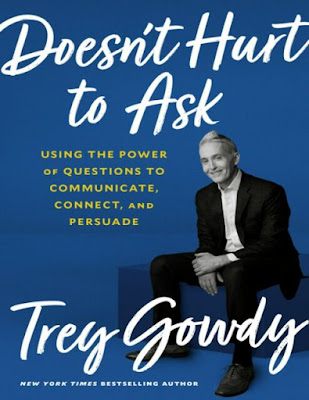 The book covers the art; and I mean it as an art of persuasion.  For those who do not recognize him, Gowdy was a prosector in South Carolina and later became a Congressman for the same.  He served in Congress for eight years.  Gowdy headed many committees during his tenure.  This book describes how he learned how to effectively argue in court and how to be on the offensive side as well as the defensive side.  Although the book does touch on politics based on cases and hearings he was involved in, he almost always prefaces it with the fact that he is not passing judgment and on many occasions describes where he felt he could have done differently.

I have already used some of the skills I learned in this book with my kids.  He uses his family life to show the reader the skills he learned.  The over theme of the book, in part is listen more than you talk.  I learned so much about the legal system as well as he pulls from the history of cases he was involved in as a prosecutor.  One of the things that registered with me was when he mentioned impeachment..... no not that impeachment, but rather the impeachment of the person, the facts or the conclusion.  He used an example about a judge that was rule a certain way 90% of the time regardless of the facts of those cases.  The judge was a respected judge and impeaching the person was going to be difficult and would not get the results he was looking for.  He instead asked the judge pointed questions and challenges, and subsequently impeached the facts on the case.

Overall, the book was great.  I recommend it to anyone that would like to improve their communication skills.