The Art of Her Deal: The Untold Story of Melania Trump By: Mary Jordan

This book started off as I expected. An informative account about Mrs. Trump's early life. There was a tinge of animosity against Melania, but I hoped it would be spread out sparsely throughout this chapter only.  Unfortunately, I was wrong. 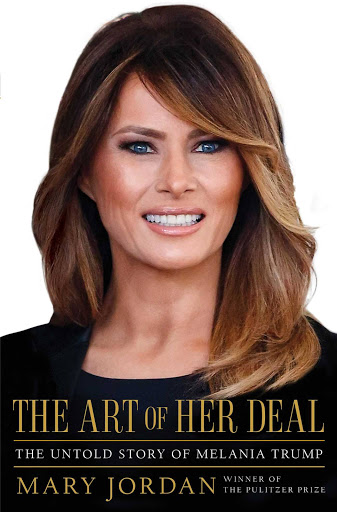 Soon after the chapter where Melania meets Donald Trump, the hatred for Trump and Melania by association was palpable.  Actually it was quite sad how the Author spoke about Michelle Obama's book when she wrote about how the Trumps made it "scary" for her family when Trump was talking about the Birth Certificate.  All the while she knew what we now know to be a FACT that her husband was one of the orchestrators of the fake Russia collusion investigation and allegations which fueled the vicious, non-stop attacks by the left and the media against President Trump. This shows what low class the Obama's are and how gullible those who allowed them and still allow them to get away with such things.

Personally, I think the birth Certificate thing was a distraction for Trump. Do I think he was born in Hawaii, sure. Do I think that he used every means necessary to get an advantage of his situation, absolutely.  From what I have read, he did register in school as an international student. Ironically, the main attack on Melania is how she was useless save for Trump's name and how she benefitted from Trump. What is good for the goose, apparently is not good for the gander.

The author brings up the "kids in cages" multiple times however fails to say the facts that Obama was the one that created those cages and that Obama himself was the one that started the practice of separating kids from their "families".  I believe this would have given her a tinge of ethical reporting.  Laura Bush spoke out against the Trumps because the Bush's were still grieving the decimation of Jeb Bush in the Republican Primary.  Why did she not speak out against the Obama's when they were doing it?

Jordan took every opportunity to go after Donald Trump especially with Mrs. Morales and Diaz that worked so many years for the Trumps.  It's funny because A. Both ladies made a living working for the Trumps and they were not forced to do so.  The ladies talked about how Trump was difficult with his clothes et al and they needed to comply, however there are countless liberal leaning famous people that share the authors perceived political beliefs that are famous for being extremely difficult such as removing all green M&Ms, certain brands of water, etc.  Hell, I did work for Matt Damon and he had special socks, combs, creams, candy, etc.  No one could use his bathroom, which I did anyhow because I do not bend a knee.  Not to mention that Morales and Diaz got paid for their interviews.

I found that Jordan kept getting stupid insignificant details and tried to put some conspiratorial spin to it.  It seemed that Melania did not catch a break from Jordan or the rest of the anti-Trump movement.  For instances, going back to the cages, Melania was the one that spoke out against Trump and later made him change his stance yet the author nor the anti-Trumpers gave her any credit and just attacked.  I have said this before, Melania is the First Lady, whether you like her husband or hate him.  None of the magazines have put her on the cover of their magazines when she obviously puts all First Ladies to shame, even Jacki O.  It is sad.  Jordan also points out how Melania stood up for Baron during the "impeachment" hearings but then agrees with the attackers about Greta Thumberg comments after she won the Time's most whatever that award is.  Big difference though.  Thumberg put herself into the limelight by going and speaking to the UN and slamming everyone.  The reality is, she is a child and is NOT a scientist.  She and her family have made plenty of money from her appearances.  I do not care what she has been diagnosed with.  She knows nothing and makes comments about "money" while they have Herman Miller chairs in their homes worth over $2,000.00 a piece.  I am sure not many of the people who heard her "how dare you" speech live like that and take a year off of school to sail around the world.... BTW in a boat made of fiberglass and all types of material that are "harmful to the environment".

And very apropos, was the statement about Trump not wearing a mask.  Recent news reports shows Governor of New York, Andrew Cuomo walking his dogs around people without a mask, Nancy Pelosi, Speaker of the House opening up a boarded up beauty salon to get her hair washed and blow dried while everyone else was banned from doing so, Not to be outdone, Governor Phil Murphy of NJ caught eating in a restaurant.

I will give you a summary of the book from the eyes of the author:

Melania is a liar.  She does not speak the languages she says.  She is a bad friend.  She does not really love Trump.  She only cares about Baron.  Anything she supports is a fake thing that is there for the purpose of helping her husband.  Her English sucks. And now she wants to win again because she loves the limelight.

It is very sad.  I expected much more.