#DELETED: Big Tech's Battle to Erase the Trump Movement and Steal the Election By: Allum Bokhari

Fantastic book.  I have been a victim of the big tech, social media arm of the left numerous times.  Some myopic readers will focus on the "Big Tech's Battle to Erase the Trump Movement and Steal the Election" sub title, which at face value is a valid prejudice, however when you read the book, it will be clear that it is a problem that CAN affect many people including anti-Trump voters.

Reminds me of a poem by Martin Niemöller 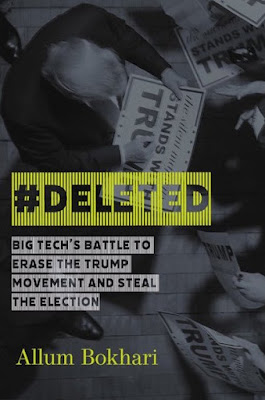 The book covers how the social media companies have used and more importantly abused the protection from Section 230.  However these companies have stifled free speech and continue to do so.  Ironically, tons of Trump supporters and cabinet members have been persecuted and in many cases, prosecuted due to perceived "medaling with the election" however the Social Media companies are overtly doing it with impunity.

Bokhari covers the biases in these companies and provides insider whistleblower information backed by subsequent admiral by these media companies.  The only reasons they have had to fall on their respective swords has been because it has been blatant and they had no choice.  Anyone who has followed me or my reviews knows I am libertarian in my political views.  I would normally say, "Start your own company" however after reading this book, it is apparent how that is a futile endeavor.  Google can hid you from search results, Apple and Google can block you from their app stores, GoFund Me  and payment processors (e.g. Square owned by Jack Dorsey) from allowing you to monetize and or sell product and services.

This is very similar to a book I read about FDR and the tire companies during the Great Depression.  The companies got together and essentially said, are we all (3-4 companies) willing pay a "tax" that would ensure that no new competitor could come into the business and disturb our earning.  This is essentially what they are doing.  Not only that, history showed us the like of John Pierpont Morgan (J.P. Morgan) that lent the US money but then had them in his pocket (e.g. The "Federal" "Reserve").  The non Trump government is beholden to the Social Media Companies.

Not sure what meaningful change can happen with the amount of power being wield by these companies and the corrupt politicians that allow then to operate this way.  But one thing is for certain, the new leftist way of operating is impossible to comply with.  Traditionally, Women's Groups have been very partisan.  You have seen countless examples of this where Sarah Palin, Michelle Backman, Sarah Huckabee, etc have had open season declared on them by the media and leftist and the silence from these groups have been deafening, while merely suggesting that Hillary Clinton looked tired during her campaigning in 2016 , could earn you a label of sexist, misogynists or worse.  These Woman's Groups are now at odds with some LGBTQ+ communities, specifically the "trans" sub group (BTW, this group is at odds with many other LGBTQ+ sub groups as well) due to their on Trans Women (That is, biological males who have transitioned or "identify" as women, are competing with  biological females identifying as women (Newspeak: sys-gender) for scholarships where there is clearly a physical/strength difference in most cases (Ronda Rousey would hand me my butt in a small package wrapped in a bow in a few seconds for sure).  Again with the Trans groups and Lesbians where they are being shunned because they do not want a relationship with a Trans Women simply because of the "equipment" differences between biological sexes.  The point is, many today are fine and well with this type of infringement of free speech because it moves the needle for their agenda, until it does not anymore.

Bokhari even explains the notion of your private/public life outside of the various platforms can get you banned for life from them.  Imagine the power that a company like Facebook or Google would have that you could be banned from their platforms because of the way you act outside of the platform.  This is such a slippery slope.  No one should want these companies to have this sort of power.

I recommend this book to all.  Do not be put off by the Trump'esqness of it.  It just so happens that Trump and his supporters are the current targets.  But remember the poem by Martin Niemöller people; tomorrow it may be you.

Posted by Manny Fernandez at 10:01 AM