Follow the Money: The Shocking Deep State Connections of the Anti-Trump Cabal By: Dan Bongino

Great book Mr. Bongino.  I loved reading this book.  Bongino is fact based, sometimes ad nauseam, author.  However it is welcomed because he has a lot to say.  This book blows open the left's insanity to bring down Donald Trump at all costs.  This book was written before the two additional bombshells that recently hit from Hunter Biden's laptop and his former business associate that gave Breitbard access to his email account, so it's not hacked.  That however did not stop the social media companies from blocking anyone daring to share it.  Nor has the media even addressed it.  This is very irresponsible and you would have thought that the media has learned, but apparently not, that all the crap they have tried to throw at Trump, the less sticks.  I think with every negative action they take against the POTUS the more they open people's eyes to the corruption that the left is dealing in. 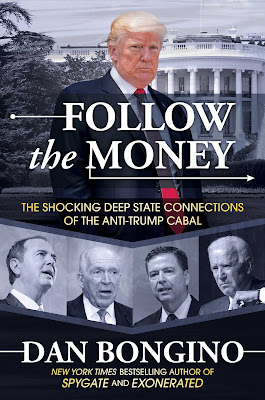 Although the story of how Hillary Clinton paid for the dossier, Obama and Biden's knowledge and participation in spying on the Trump campaign, the FBI's total corruption, and even the CIA's evolvement has been know for a long time, Bongino sheds light on even more damning evidence in this.  However as I stated before, the media is in the bag for Biden and the Dems and will do everything they can to amplify all of the fake news about Trump and spike all of the negative stories about Biden so the people are not able to see the real Biden. The investigations are in play and have already yielding damning information about the Obama / Biden corruption.  Hopefully if Trump wins re-election, these investigation will move forward and we will once and for all rid ourselves of the corruption at the highest levels of government.  The Dems will undoubtedly accuse President Trump for using his powers to go after his detractors which is so ironic being that the Dems were the ones who actually colluded with the Russians to get fake info on Trump, lied under oath to Congress, laid purgers traps,

Bongino does an excellent job connecting the dots and the players.  I have been following these stories since the beginning.  At first because I wanted justice if Trump was indeed guilty of "High Crimes and Misdemeanors" or if he was involved with Russia to fix the election, I wanted him prosecuted and/or removed.  But soon I realized that it was not so.  I wanted to follow the evidence.  Seems that not everyone did the same.  Many people walked away from any evidence after the grueling, and in my opinion unwarranted, Mueller investigation and have stuck to the previous fake charges while blinding themselves of any new evidence that would not only exonerate Trump (God forbid) but incriminate the players of the Democratic Party.  I have said this on my reviews I have done, if the Right were to hold their politicians accountable and the Democrats the same, they would be forced to operate on the straight and narrow.  However instead, each party allows their respective parties to get away we corruption and possible crimes all in the name of party.  This would make our country a much better place.