The Cost: Trump, China, and American Revival By: Maria Bartiromo and James Freeman

Sunday Morning Futures with Maria Bartiromo is probably the only show I will watch on Fox.  A very smart host from a financial perspective, she is also

a damn fine journalist.  Bartiromo covers the Trump administration but focuses on the threat of China and the attempted coup of a duly elected President. 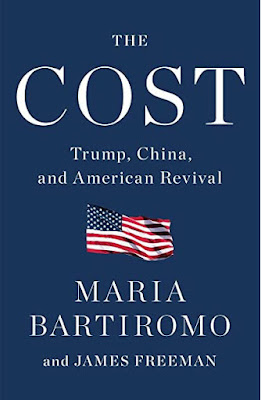 As I write this review, Joe Biden has been coronated  the President Elect for 2020 election by the media.  As is the typical MO, the Left and the State-Run (Left) Media, tells you, "There is nothing to look at here, move along".  Anyone who states anything different from the media agreed upon talking points, is instantly banished from the "acceptable social person" category and considered "deplorable".  This coming from the same people that pushed a fake Russia collusion, impeachment, obstruction, racist, xenophobic narrative for four years with impunity.  We have sadly seen a corruption of the media and social media companies during Trump's last year.  Although 2020 has been the worst year of my entire life, and although we saw unprecedented questionable actions by our state and city governments, that anyone, and I mean ANYONE, regardless of party affiliation should worry about.  Additionally, we have seen reports of voting machines of which run particular software where high ranking Democratic Party Senators, Congresspersons, and political mouthpieces for the left have significant others and family as the executives and investors into the same.  I find it interesting how the left in the U.S. say that Voter ID is racist.  However I was speaking to a friend in Jamaica where it is predominantly Black people, they have to apply for a specific voter ID, different from your other IDs.  How is this NOT racist there?  Arguably, there is more poor poverty there than here in the US.

The China situation is real.  They are a huge threat to our country.  The destabilization in the U.S. caused by this political unrest  puts us at risk.  China does not want Trump in the WH for a second term because he is the ONLY POTUS that has put the needed pressure on them.  They know for sure that a Biden administration would be a walk in the park and they could go back to their previous S.O.P. which included Intellectual Property theft, holding the U.S. hostage with manufacturing all of our goods, the funding of projects for other countries knowing they would be unable to repay, seizing  control of shipping lanes which do not belong to them.  The threat is very real and to see Mr. Biden's nonchalant attitude about China not being a threat is appalling and disturbing.  He is either clueless or complicit, either one is bad, but I believe he is both.

Some of the information is repetitive for anyone that has been following the TDS this past four years.  How the FBI higher-ups colluded  and conspired with the Obama administration and other prominent three letter agencies to perform a coup, ironically today the left accuse Trump of attempting a coup  because he is contesting the outcome.  However, Hillary Clinton is on record telling Biden NOT to concede at all.   I believe the left has come after Trump with such vengeance because he is not your typical politician.  This man does not care about politics insofar as he is POTUS.  He has outed them.   They obviously do not want to face the consequences.   The media will tell you there is not evidence however time and time again, the former CIA director, FBI Director and others at that level have come out on the media saying they have seen evidence and did not know about this or that, but while under oath and with the fear of purging themselves they say the complete opposite.  If those who choose to NOT believe what the Right is saying about this, review the transcripts for yourself.

Bartiromo is a very effective reporter and is well connected both in Financial circles as well as the political ones. I recommend this book.

Posted by Manny Fernandez at 5:09 PM