The Problem with Lincoln By: Thomas DiLorenzo

Let me start by saying that ANY negative book about Lincoln is considered blasphemy to the Lincoln lovers.  Lincoln is an interesting man, not so much for positive things he did but more for how he is claimed by both political parties here in the US as well as, ironically, tyrants of the rest of the world. 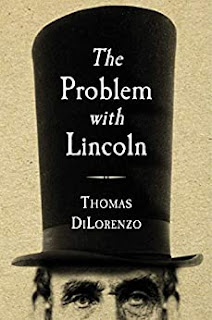 The Republicans love to claim Lincoln as their way of proving they are not racist and the Democrats need to keep Lincoln as a savior since they claim, falsely that the two parties swapped.  The problem runs much deeper.  There are many "dismissed" issues of what Lincoln did that are the third-rail for the Lincoln Lovers.  Such as the letter he wrote to Horace Greeley

It is clear to anyone during cursory research that the "Civil War" was in fact NOT fought to end slavery.  Lincoln clearly did not care one-way or the other about slavery.  Slavery was a tool for Lincoln to cover up his tyrannical ways of governing.  Here is the rub:

There are so many more examples.  However I WILL say that the slaves' plight was advanced in fact because of those moves Lincoln made regardless of WHY he did them.

I understand that Lincoln Lovers think badly about Mr. DiLorenzo.  You can absolutely disagree with him, but if you look at the facts, they are true.

Sadly our history is being re-written to support the victim mindset and as we all know, history repeats itself.  I would rather have books, statues, songs, movies, et al reminding us of how abhorrent slavery was and where we have come.  A read a book by Adam Corrola and in it, he talks about the "Progressive" movement.  He uses the analogy of smoking in a restaurant.  You use to be able to smoke in a restaurant.  Then there was a smoking and non-smoking section, then they said you can only smoke by the bar, then they said you had to smoke outside, then they said you were too close to the entrance and you had to walk down the street.  It reminds my of this great country or what was once a great country.  Sadly the US has become a Banana Republic where corruption reins supreme.  We now have voter fraud (you can say no, but we all have seen the videos), state run media where they cover for one party and lie about the other, and a social media that crushes free speech.  The saddest thing about it, is that there is no putting that genie back in the bottle.

Posted by Manny Fernandez at 3:03 PM