The Perfect Marriage By: Jeneva Rose

What is up with Adam?  The guy does not know when good enough is enough.  The book started off as a great concept.  I did enjoy the book but found myself wanting to shake Adam and beat him in and about the facial region. 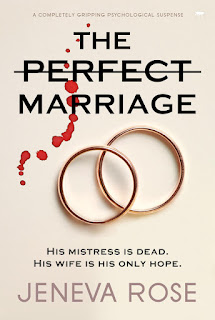 The book describes a married couple; Sarah and Adam.  Sarah is a high powered defense attorney and Adam is a one-hit-wonder author suffering from writers block.  Adam starts a 16 month affair with Kelly Summers.  Sarah and Adam purchased a vacation home.  This house was the location where Adam and Kelly had their rendezvous.  After a romp in the vacation home where Adam and Kelly had rough sex all night, Kelly is savagely murdered in her sleep.  Adam is accused of her murder.  Sarah his wife ends up defending him in the murder case.

Quite frankly, the book seems as though it ended abruptly and then... the kicker.  Sarah was a real bitch.  She could have done something else.  She could have had him sign off all marital assets and then shown the Sheriff's DNA that would have shown doubt and he could have walked.  Kelly would still be dead and Adam would have nothing.  Instead she killed him.  Then again, she DID kill her mother.