Slanted: How the News Media Taught Us to Love Censorship and Hate Journalism By: Sharyl Attkisson

Long gone are the days when a journalist had the zeal for their profession.  Where the "character" of the unrelenting, "report the facts at all cost" persona played in Hollywood has sadly passed away.   My son and my money are going to journalism school. My son is one of those "let the chips fall where they may" kind of thinkers. After reading this book, I feel he has an uphill battle. 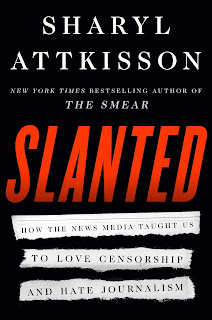 This book is precisely what I have been talking about for a decade or more now, but put into a concise book.  The author is a Trump supporter, or at least she may be, but the book is not necessarily about Trump insofar as the decline in journalism since he became president. If you want to read a great book about how the industry has devolved and can put aside someone not parroting the played out narrative about orange-man-bad then I recommend this book. She not only covers the Trump phenomenon with the press but other stories like the Harvey Weinstein, NBC, debacles, etc.

The book covers how the journalists have allowed themselves to be nothing but a propaganda delivery system. When I was younger, you could not tell party affiliation of most journalists both on air and in print. The news was delivered as facts and the viewer/reader could form their own opinions. This is no longer the case.

The author gives specific example in her tenure of inexplicable canceling of stories that were fact-based and outed corruption at all levels, all parties and all people.   She discusses the language that has become acceptable by reporters that would have never been allowed in the past such as liar, no proof, etc.

Journalists have become nothing but political pundits with zero integrity and zero respect for their craft.  She discussed the devolution of CNN under Zuckerman's rein as well as other previously respected news outlets. This is not partisan either. Viewers and readers from both parties are disillusioned with media today.

I came out of the book having a much better knowledge of the "narrative game" and how it's played. It's bitter sweet because knowledge is indeed power but ignorance is bliss. Knowing that it's all a sham is disheartening and a sad day for us as people wanting to see/read news based on facts and not propaganda.  I would love to see a media outlet purchase the failing CNN and have a policy to report the news based on facts. No opinion shows, just facts. Any journalists that lets their biases show or wears there party on their sleeves will be asked to resign or put on stories that have zero political spin such as baby alligators born in a zoo.  I assure you that network would crush everyone out there.

A very interesting portion of the book is how social-media is able to manipulate real media because of the mob mentality we have allowed to take root in this country.  All speech, yes even hate speech, heck hate speech more so than non hate speech should be protected. The media should report the facts regardless of corporate sponsors and political connections.  I despise what social-media has become. It has become a bully pulpit for a small group of loud people that force others to act like they want or suffer the wrath of the mob. I would hope and think that every American wants to be free to voice their opinion as hurtful, offensive, or misinformed as it may be.  No one person or group is the aborter of speech. What is offensive to you, may not be to me.  What is hurtful for you may not be for me. I would not assume to know what is best for you, I don't want you controlling me based on what YOU feel is best for me.

Posted by Manny Fernandez at 6:48 PM