The Debt Bomb By: Senator Tom A. Coburn, M.D.

Normally, I try to stay away from books by sitting politicians as they usually are just full of self-righteous proclamations.  The one exception has been Ron Paul and now Tom Coburn, Senator of Oklahoma and his book.  Dr. Coburn is exceptionally in tune with the problems we face today.  He is non-partisan and holds nothing back.  He is critical of his own party as well as the other(s).  Dr. Coburn explains in horrifying detail the complacency of his fellow senators and congressmen while he served in the house.  This book proves most of the assertions of Washington D.C. 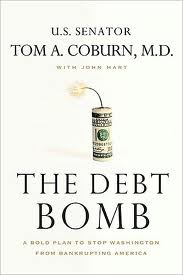 Although Dr. Coburn did not mention the "Federal" "Reserve" and its part in the the debt bomb, I truly feel that if we had more politicians such as Dr. Coburn, we would not be in the situation we are today.  Although I do not agree 100% with term limits as Thomas Jefferson was arguably a career politician and cannot imagine life without his hand being involved.

Dr. Coburn has self-imposed term limits on his time in the House and in the Senate. He is on his way out and knows where the "bodies are buried".  He is of the opinion that the Left and the Right are aware of the problems and the solution but they lack the political courage to do something about.  All the while, the people of this country are believing the status quo is sustainable.  Entitlements need to cut as does our DOD budgets.  This is a fact.  The Left is fine with cutting DOD but does not want to touch entitlements, and the Right is the opposite.  It is imbecilic to believe that this country can sustain the entitlement programs today, let alone the ones that are planned.  Mr. Coburn is not as "radical" as I am, I understand.  His ideas are based on continuing to provide the entitlements to some degree while I am more on the side of doing away with most of them if not specifically stated in the Constitution.  I am for them if the Country decides they want to amend the Constitution.

The book is excellent as it dives into the mindset of these careerist politicians and what makes them tick.  Write a letter to your politicians and recommend them to read this book.  It was certainly beneficial to me.

Posted by Manny Fernandez at 10:10 AM